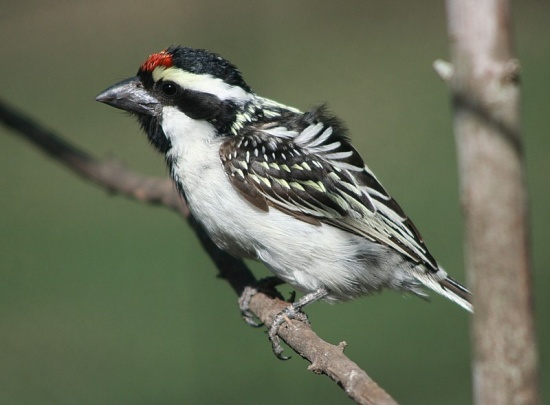 Adult: Head boldly marked with a red forehead, black crown, central nape, eyestripes, and throat; the eyebrow is yellow and white. Upper parts largely black with yellow markings; wings black with white and yellow. Under parts white to yellowish white and pale grey. The bill is black, the eyes dark brown, and the legs and feet blackish.

Single or in pairs.

Monogamous and territorial. Nest hole excavated by both adults in dead tree stems (9-12 cm in diameter), usually 1-3 m above the ground. Nest holes are sometimes reused. Swallows nests and woodpecker nests may also be used, but this behaviour is rare. Two to four eggs are laid August to April. Both parents feed nestlings. Parasitised by Lesser Honeyguide and (rarely) Greater Honeyguide.

Search for photos of Acacia Pied Barbet in the BirdForum Gallery