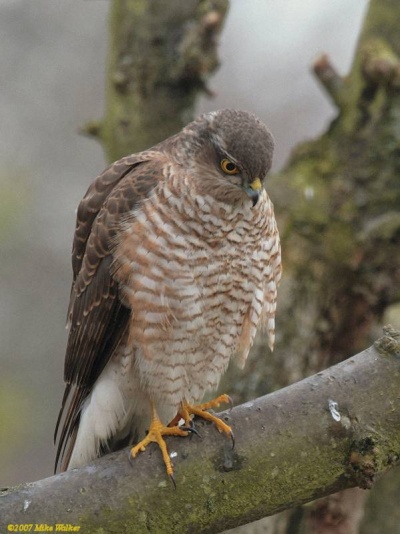 Juvenile brown above and barred brown below

All have a white supercillium, more noticeable in the adults 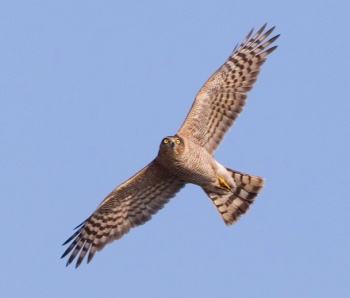 The female can be confused with the Northern Goshawk, which is a similar size, but has more 'bulk'

Europe and north Africa to eastern Asia.
Europe: the most numerous and widespread Accipiter found almost throughout the region except for Iceland and the far north of Scandinavia and Russia. In the south breeds on the western Canary Islands, across North-West Africa and on Corsica, Sardinia and Sicily. Also breeds throughout Greece and Turkey (except much of the central plateau) and east to the Caspian. In the Middle East may breed regularly in Israel but rare.
Asia: Breeding in Himalayas and Siberia to eastern Asia.

Northern birds are migratory with known wintering grounds to Africa, India, Sri Lanka and Indochina. Over most of Europe this is a rather sedentary species. Winter visitor or passage migrant to much of Turkey; the Middle East and North Africa. Small numbers occur on passage at Gibraltar and the Bosphorus but much larger movements can be seen at Falsterbo. Peak periods here are mid August-mid November and April-early May. 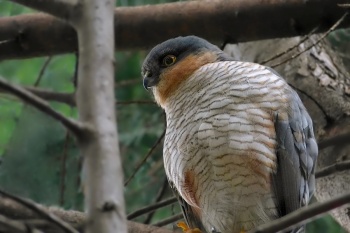 Deciduous, mixed or coniferous woodland with adjacent open country. In recent years with decreased persecution has become commoner close to human habitation and is now moving into towns. In winter often found far from woodland, hunting along hedgerows in open farmland or in coastal areas.

It hunts birds in woodland or cultivated areas, relying on surprise as it flies from a perch or hedge-hops to catch its prey unaware.

Their main diet consists of small and medium sized birds, but they will also catch small rodents such as mice.

The flight is a characteristic "flap – flap – glide".

This species nests in trees, building a new nest each year, often utilising the abandoned nest base of another species, such as crow or even a squirrel's drey. There is a single clutch of 4-6 eggs, which are whitish, with maybe a blue or green tinge and are heavily marked with reddish brown spots and blotches.

In Denmark, male sparrowhawks have a higher mortality than females during their first year of life, while the reverse is the case in following years.

Search for photos of Eurasian Sparrowhawk in the BirdForum Gallery

Search for videos of Eurasian Sparrowhawk on BirdForum TV