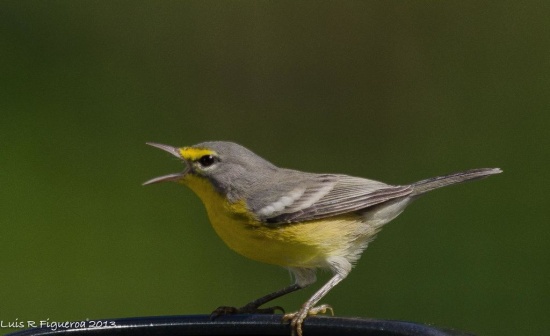 Bluish-gray upperparts with two white wing-bars. Underside including throat yellow (except undertail coverts and abdomen, which are white); face shows a yellow eye-brow but a white sub-ocular crescent bordered in black. Bill dark but possibly with flesh-colored base, and with flesh-colored legs.

St. Lucia Warbler (not overlapping in range) is the most similar species. Looks similar to a female Northern Parula, but lacks the yellowish-green patch on its back and has a yellow eyebrow stripe. Other similar species are possible in migration.

St. Lucia Warbler and Barbuda Warbler were previously thought to be conspecific with Adelaide's warbler.
Formerly placed in genus Dendroica.

Search for photos of Adelaide's Warbler in the gallery

Search for photos of Adelaide's Warbler in the gallery