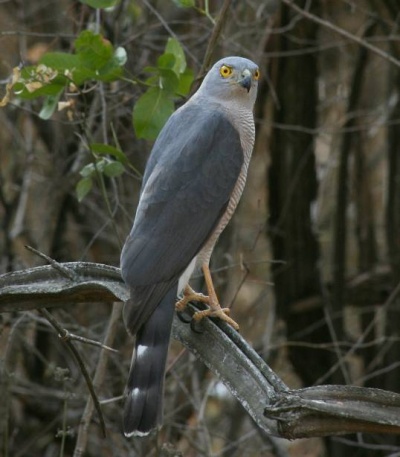 The male (38 cm, 200 g) is smaller than the female (46 cm, 350 g)
The upperparts of the male are slate and the underparts are white, finely barred rufous. The male's tail is indistinctly barred, and has two white spots on the upper side.
The female has dark brown upperparts and the underparts are barred brown (less finely barred than the male).
In both sexes the cere, eyes and legs are yellow; the underwing is barred, and the underwing coverts are of a similar colour to that of the barring on the breast.


Immature birds: The underparts have brown blotches, there is a dark streak down the centre of the throat, and the eyebrow is white.

Most of Sub-Saharan Africa: from Senegal in the West and Eritrea in the East to South Africa in the South. 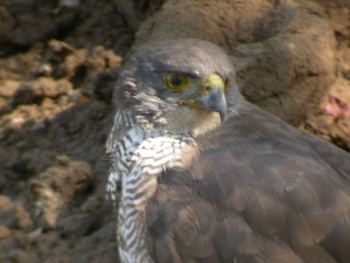 Complex. At least nine taxa have been described, including: 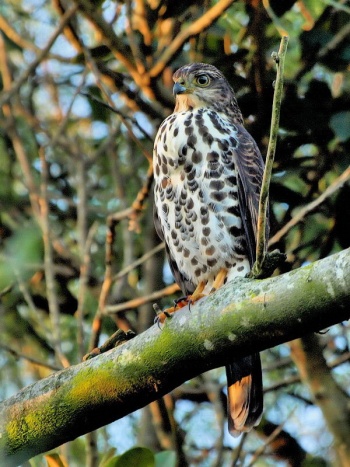 Some recent authorities (Kemp & Kemp 1998, Borrow & Demey 2001, 2004, Ferguson-Lees & Christie 2001, Allan 2005) regard all these taxa as constituting a single species. Others (Kemp 1994, Clark & Davies 2000, Sinclair & Ryan 2003) regard the latter four taxa as a separate species, Red-chested Goshawk Accipiter toussenelli. Louette (2010) has suggested that the whole complex be regarded as a ‘superspecies’ with the A. tachiro and A. toussenelli clades recognised as separate ‘paraspecies’, since the two have phylogenetic, morphological and habitat preference differences, and have not been proved to interbreed. Louette also suggests that, on molecular grounds, A. t. unduliventer may constitute a monotypic third species within the complex.

The African Goshawk is usually inconspicuous, but its presence is often betrayed by its call which is often given when circling high above the forest, but is also given by birds perched in the canopy of large trees.

Prey comprises mainly birds (usually bulbul size or smaller), but includes small mammals. Hunting is usually done using a quick dash from a perch in cover, and birds are caught both in flight and on the ground.

Search for photos of African Goshawk in the gallery