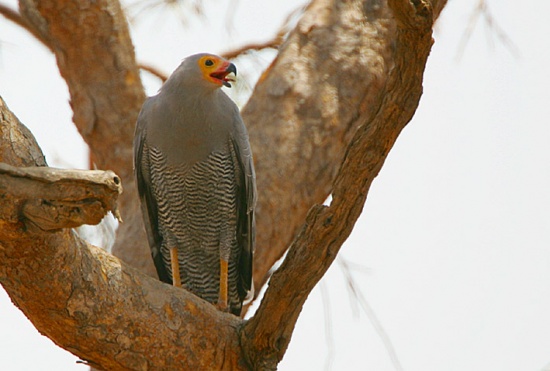 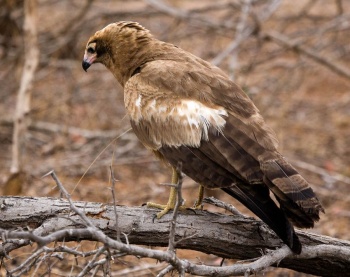 51–68 cm (20-26¾ in)
As with other birds of prey, the bill is short with a sharp, hooked tip to the upper mandible. The bill is black, and the cere and facial skin are yellow (red when displaying). The feet and legs are yellow.
The upperparts, head and neck are grey. There are large black spots on the wing coverts. The face is bright yellow, and the belly is finely barred with black and white. The tail is longish and is white, with a single white bar across the middle and a narrow white tip. The head is quite small compared to other raptors, and in flight the wings are broad and rounded.

Sub-Saharan Africa: widespread from Senegal to central Ethiopia and south to the Cape (South Africa).

Absent only from the most arid areas of the Horn of Africa and the south-west.

Resident, possibly nomadic in some areas and fairly common in much of its range. 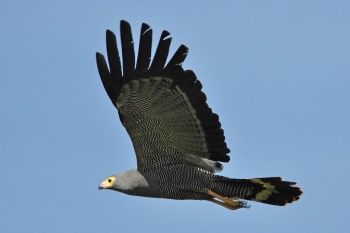 Two[1] to three subspecies are recognised:

Subspecies prigoginei (smaller and darker birds from western DRC) is not generally recognised.

It is found in closed and open savanna woodlands, forests, near wooded kloofs or stands of alien trees. It is usually solitary and spends much time perched in tall trees and is usually seen flying over or near forests or well-wooded areas.

They are specially adapted for extracting food from holes and crevices in trees. The tarsal joint "knee" can bend backwards, sideways or forwards - allowing the bird to use its long legs/feet to get into tree cavities where it preys on bats, nestlings, reptiles and amphibians. It also eats insects and birds eggs.

They breed from June to November. The nest is a stick platform, about 75cm in diameter which is placed in the canopy of a tree or on a bush on a cliff face or in a small rock niche. The nest is lined with green sprigs.

The call is a plaintive whistled su-eeee-oo or a high pitched wheep-wheep near the nest.

Search for photos of African Harrier-Hawk in the gallery

Search for videos of African Harrier-Hawk on BirdForum TV