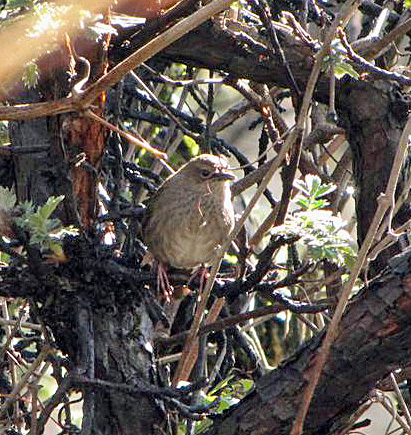 Because this bird is so difficult to see, identification and location is usually dependant on knowing its calls. [Calls]

The Knysna Warbler is similar, but has a shorter tail and is darker below with less obvious streaking. The song of the Knysna Scrub Warbler is also similar to that of the African Scrub Warbler, but starts with longer and louder notes.

There are four subspecies, based on differences in shade of plumage colour, and size.[1]

Dense scrub (including bramble, bracken and heath) at forest edges and along streams.

A skulker, usually on or near the ground, in dense cover; habits are therefore poorly known. Eats insects.

Monogamous and territorial. Two eggs are laid in a cup of plant material built on or near the ground.

The song begins with high-pitched "tik, tik, tik ...." notes speeding up to a lower-pitched trill.
The alarm call is a soft "chrr-chrr".

Search for photos of Barratt's Warbler in the gallery