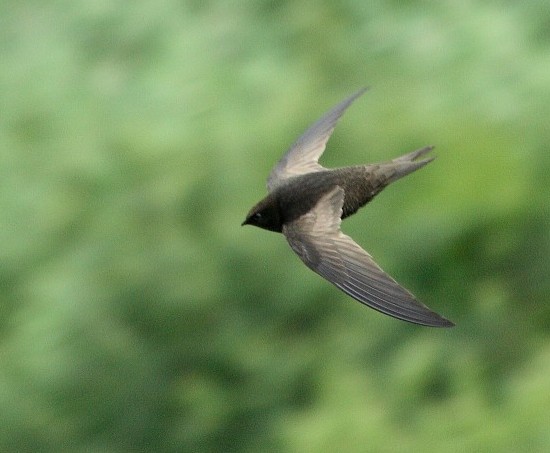 Length 19 cm, mass 42 g.
Adult: Head blackish brown except for pale grey-brown forehead, lores and supercilium. Mantle black and back to tail dark brown. The primaries are blackish, the outermost being the darkest. From above, the secondaries and adjascent greater coverts are greyish brown, contrasting with darker back and primaries. Throat and upper breast pale, and the rest of the under parts are blackish.
The bill is black and the eyes dark brown.


Some populations are resident, others are intra-African migrants.

Madagascar Swift is sometimes included in this species.

Often feed alone, but sometimes in flocks. Feeds on insects caught in flight; sometimes feeds at night. Attracted to emergences of termite alates and to fires.

Breeds in colonies on cliffs (sometimes trees in eastern Africa). Shallow nest built in crevice using feathers, grass and plant down collected aerially. One to two white eggs are laid (September to February in southern Africa).

The call is a screaming 'shree', higher-pitched than the call of the Common Swift, and repeated frequently in aerial displays.

Search for photos of African Swift in the BirdForum Gallery