Sub-Saharan Africa: widespread and common from Senegal east to Sudan, Ethiopia and western Somalia and south to north-east Namibia, Botswana and north-eastern South Africa. Absent from most forested areas of West and Central Africa and decreasing in far north and south of range. 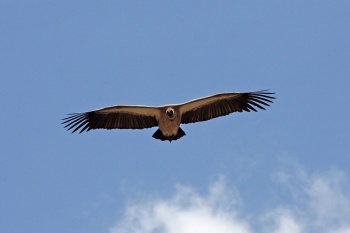 This is a monotypic species[1], which is sometimes considered as conspecific with Asian White-backed Vulture G. bengalensis.

Searches for carrion over savanna, roosting and nesting colonially on ledges on cliff-faces in mountains.

Gregarious; less so when breeding.
Roosts in trees at night, soaring out soon after sunrise to forage; gliding speed about 58-65 km/h, but can dive at up to 120 km/h; follows other vultures, crows, kites, Bateleur and hyenas or lions to locate food. Often rests on ground by day; drinks and bathes regularly at waterholes. Aggressive at carcass, new arrivals bounding in with wings and neck outstretched; may loaf on ground near carcass for hours after feeding.
White-backed Vultures are adapted to feeding on soft tissues (muscles, intestines etc) and cannot rip open the large carcasses. They are therefore reliant on other vultures or mammals to break into the carcass.

Search for photos of White-backed Vulture in the gallery