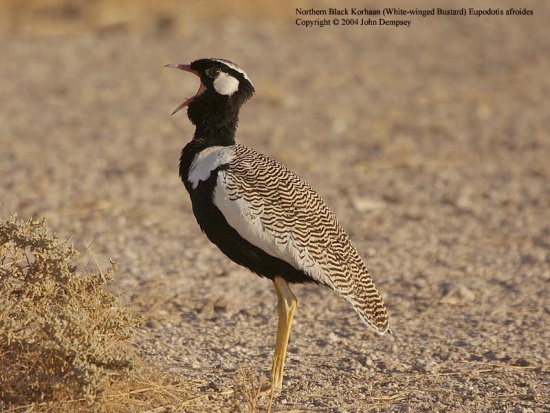 Adult male: Head black with white cheek patches and brown crown. Neck and under parts black; the white collar on the mantle extends to the sides of the upper breast. The back is barred black and brown. The folded wing shows a broad white lower edge; otherwise barred black and brown. In flight, the primaries show white bases. The bill is red with a grey tip; the eyes are brown with a red eye-ring; and the legs are yellow.

Adult female: Similar to the adult male, but with a brown head, neck and breast (crown and neck barred black), and without the wite mantle collar.

The Black Bustard is slightly larger, has all-black primaries, and black bars on upper parts are broader; the Red-crested Bustard has white chevrons on the upper parts, duller (off-white to grey-green) legs, and lacks white on the primaries; the male Black-bellied Bustard has longer neck and legs, a black line down the front of the neck, paler legs, and more white on the wing in flight.

Formerly considered conspecific within Black Bustard (E. afra). Separated on the basis of differences in genetics, voice and plumage.1,2

Polygynous; both males and females defends their own territories against others of their own sex. One to three eggs are laid on the ground year-round, but mainly September to March. The female incubates the eggs and cares for the young.

Search for photos of White-quilled Bustard in the gallery

Search for photos of White-quilled Bustard in the gallery