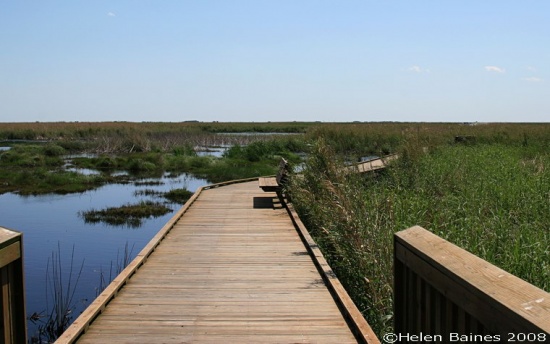 Photo © by HelenB
The boardwalk at Shoveler Pond in April 2008. The area has recovered well since the Hurricane Ike storm surge devasted the refuge in Sept. 2008

A national wildlife refuge, over 34,000 acres in size, consisting mainly of coastal marsh, coastal prairie and coastal woodlands. It is part of the Texas Chenier Plain National Wildlife Refuge Complex, which embraces more than 100,000 acres from the Louisiana border to Galveston Bay. Anahuac NWR is located on East Galveston Bay, approximately 1.5 hours drive, east of Houston. 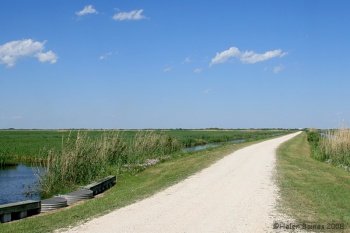 Photo © by HelenB
The beginning of the 2.5 mile auto tour loop around Shoveler Pond before Hurricane Ike, April 2008

318 species of birds have been recorded at Anahuac NWR. Six rail species are there: Clapper Rail, King Rail and Virginia Rail, and Sora. Black Rail is present, but very rare. Yellow Rail are there, too, but almost impossible to see. Best chance is to join the Christmas Bird Count and ride the "swamp buggy", or sign up for a Rail Walk in the spring - see below for more info. Thousands of geese and 27 species of duck winter here every year from November to February. One of the best places to see Least Bittern, Purple Gallinule, Gull-billed Tern, and Yellow Rail. 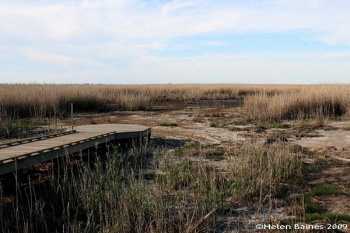 Photo © by HelenB
The blind at Shoveler Pond was destroyed by Hurricane Ike in Sept. 2008 and has not been rebuilt, but a new blind has been built at the Jackson Woodlot. Photo taken in April 2009

Over 50 species of butterflies, 10 species of dragonflies and damselflies, and other insects and spiders have been recorded on the Refuge. 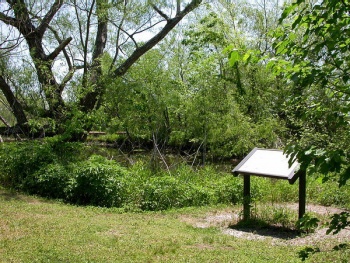 Photo © by HelenB
The Willows at Anahuac NWR. Photo taken in April 2008, before the damage by Hurricane Ike in Sept. 2008

Anahuac NWR is a unit of the National Wildlife Refuge System, administered by the U.S. Fish and Wildlife Service, Department of the Interior.

The Refuge is 34,296 acres in size (54 sq. miles) and consists of coastal marsh (fresh, intermediate, brackish and saline), coastal prairie (non-saline and saline), and coastal woodlands.

The town of Anahuac, some miles to the north of the Refuge, was named after the ancient capital of the Aztecs, in 1831. Anahuac NWR was established February 27, 1963.

Recreational Use:
Annual visitation to the Anahuac NWR exceeds 72,000 visitors.
Uses include: 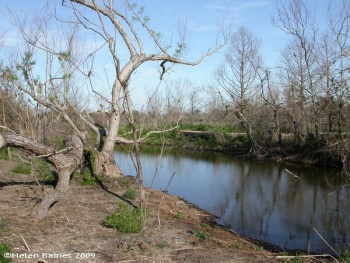 Photo © by HelenB
The Willows in April 2009, 7 months after Hurricane Ike devastated the Refuge. This area has not recovered completely as the willows and bald cypresses were killed by the saltwater storm surge

For a PDF map of the Refuge, go to this page on the FWS website: [1] 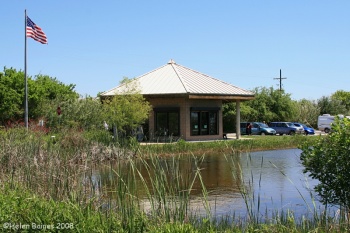 Photo © by HelenB
Anahuac Visitor Information Station, before it was severely damaged by Hurricane Ike in Sept 2008. The shell of the structure has been converted into a gazebo by the picnic area

Area Map:
PDF map showing location of Anahuac NWR and other hotspots in the area

What to Expect:
Anahuac NWR is remote. Visitors should come prepared as there is no drinking water available on the refuge, the closest gas station is more than 20 miles away and be aware that alligators, snakes, fire ants and mosquitoes all occur there!

Search for photos of Anahuac National Wildlife Refuge in the gallery

Great for rails, shorebirds and fulvous whistling-ducks. Three main areas within the Refuge: Shoveler Pond, the Willows and East Bay.

Occasionally good for migrating warblers at The Willows but not consistently good.

Often the most reliable location on the upper Texas coast for Least Bittern, Purple Gallinule, Gull-billed Tern, and Yellow Rail.

King Rail will often stand in plain view on the loop road in spring.

Can be great for ducks and shorebirds in season; East Bayou Tract good for migrant shorebirds and Fulvous Whistling-Duck (the duck can also be found on Shoveler Pond). Glossy Ibis, Hudsonian Godwit, etc. all possibilities at East Bayou Tract in season. I've seen Swallow-tailed Kite there as well.