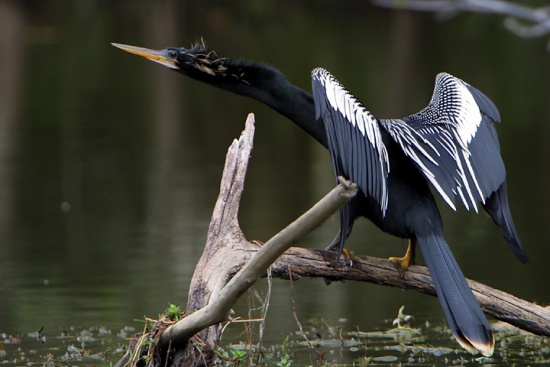 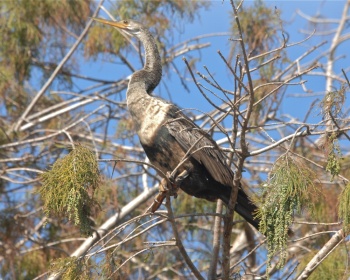 In the U.S., it is found all along the Gulf of Mexico coast, inland east Texas to Florida.

It is also found along a narrow strip on the southwest coast of Mexico, in Cuba (vagrant in the rest of the Caribbean), and in Central and South America from Guatemala, Belize and Trinidad and Tobago south to Argentina (but not Chile). 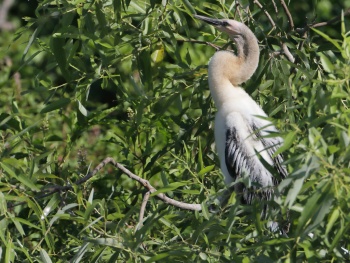 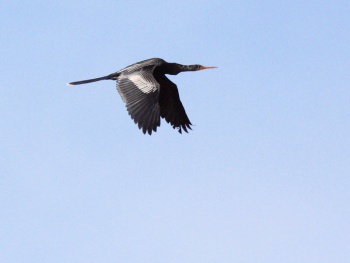 Dives frequently for fish, which it spears with its long sharp bill, then tosses them in the air until it can swallow them headfirst.

The colloquial name, Snakebird, can be quite descriptive when this bird is in the water - it swims with its body mostly submerged, and just the long sinuous neck above. On quick glance, it can thus appear to be a swimming snake. The other common posture is on a tree near or over water, where it spends hours with wings extended, drying in the sun; unlike ducks, it has no oil with which to waterproof its feathers, an adaptation to improve its diving ability.

Their diet consists mostly of fish, with the addition of frogs, newts and salamanders also featuring.

Monogamous. They often breed colonially and sometimes with Cormorants

Search for photos of Anhinga in the gallery

Search for photos of Anhinga in the gallery