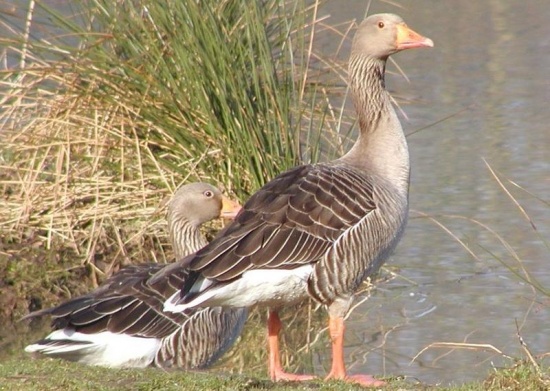 The heaviest of the 'grey' geese, 76-89 cm (30-35 in) long and 2.5-4.1 kg weight with a 147-180 cm wingspan.
A large grey goose with a heavy orange-pink to pink beak. It has a fairly uniform grey body, pale grey patches on forewings conspicuous in flight, white vent and under-tail, and white upper tail covert band. 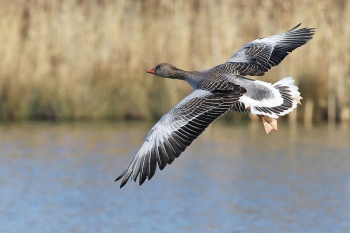 Many breeds of domesticated geese are derived from Greylag Goose, or hybrids between Greylag Goose and Swan Goose. Domesticated birds, which frequently escape into the wild, can be told by their even larger size (up to 8 kg), and are usually very fat towards the rear end, which forces them to walk with a more upright posture and to swim with their tails higher in the water than wild birds. They can vary in colour from the same grey as wild birds, through piebald, to all-white; birds with Swan Goose genes may have a large knob at the base of the bill.

One of the easier grey geese to identify, told by its large size, heavy bill, pale grey forewings, and classic "farmyard goose" honking calls. Taiga Bean Goose is darker, slightly smaller, and with a black-and-orange patterned beak. Juvenile Greater White-fronted Goose is superficially similar, but smaller, and with a bill often mottled blackish; adults are more easily separated by their white forehead, but beware of the occasional domesticated Greylags with a white forehead. White domesticated Greylags can also be mistaken for Snow Geese, but lack the black primary feathers that Snow Goose has. 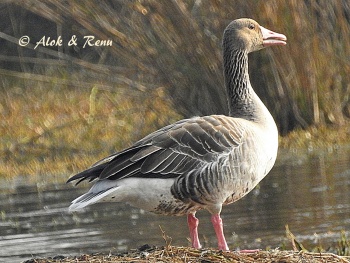 In flight, the pale forewing is shared only with Pink-footed Goose; the pattern of pale differs, with Greylag having a darker, browner 'spur' at the mid-base of the wing on the secondary coverts, while on Pinkfeet the pale covers the whole forewing; Pinkfeet are also smaller, and have a dark brown head and neck.

Hybrids with Canada Geese (colloquially, "Canalags") are frequent where either species has been introduced into the range of the other; they most commonly involve domesticated birds which have lost the natural behavioural traits which prevent wild birds from hybridising.

Breeds from Iceland across northern and central Europe and southwestern and central Asia east to the Pacific coast of Russia; winters a short distance further south, with populations breeding in warmer regions often resident.

There are three recognised subspecies[1][2].

Varied wetlands; from subarctic in Iceland and northern Norway, to warm continental in the south of the range. In northwestern Europe (Britain, Denmark, Germany, etc.), human-habituated birds (some genuinely wild, others derived from reintroduced stock) commonly occur in urban parks and lakes (where they often become hand-tame), but in other areas very wary, particularly where hunted. Often flies several kilometres to feed, returning to larger lakes to roost at night where they are safe from ground predators like foxes.

Starts March/April, in continental Europe and Iceland (nominate) egg-laying starts late April, peaking mid May. In UK first eggs late March. Usually five to eight eggs in a large nest in floating vegetation or hidden in reeds. The incubation period is about 28 days. The gander stays with the family group for a full year and migrating together.

Largely vegetarian, grazing on waterside plants and on crops in fields. The large, strong bill enables it to dig for root crops like turnips and potatoes.

Call given by individuals in a skein coming in to land. Sharp clicks produced by a squirrel are also heard
Recording © by Alok Tewari
Keoladeo National Park, Bhartpur, India, December 2016
 Another Greylag Goose voice clip

Search for photos of Greylag Goose in the gallery