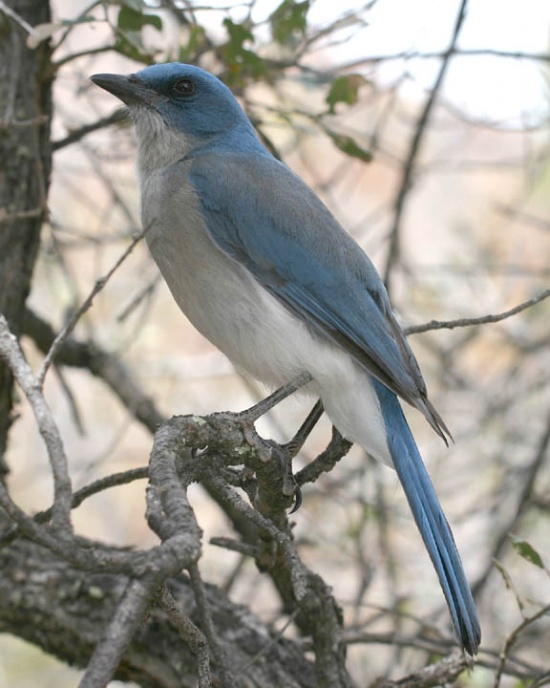 28 - 32cm. The Mexican or Gray-breasted Jay, is a larger, stockier member of the genus of "scrub-jays":

Sexes similar, females are slightly smaller. Juveniles are mouse-grey above.

Similar to the other scrub-jays like Woodhouse's Scrub Jay but lacks collar or sharp contrast between throat and belly and has no white supercilium. 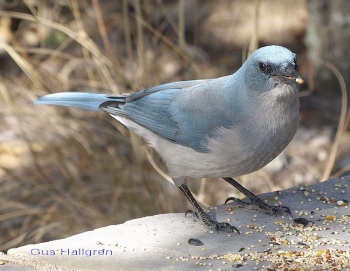 In US, resident in south-eastern Arizona and a part of the Rio Grande Valley of Texas. Also northern to central Mexico. Common in its range.

This species has been split from Transvolcanic Jay (Aphelocoma ultramarina).

An omnivorous feeder. Takes nuts, fruits, seeds, nectar, invertebrates, small vertebrates like lizards or small birds and carrion. Where available also scraps provided by humans. Caches nuts to feed on through the winter. Especially in July and August caches thousands of poine seeds and acorns.

These jays have a highly developed social system, with one or two dominant breeding pairs leading an extended family flock of up to 20 birds. The younger members act as nest helpers. The bulky nest is made of dead twigs and placed 4 to 24 m above the ground in a leafy tree. Lays 1 - 5 eggs.

Search for photos of Mexican Jay in the gallery