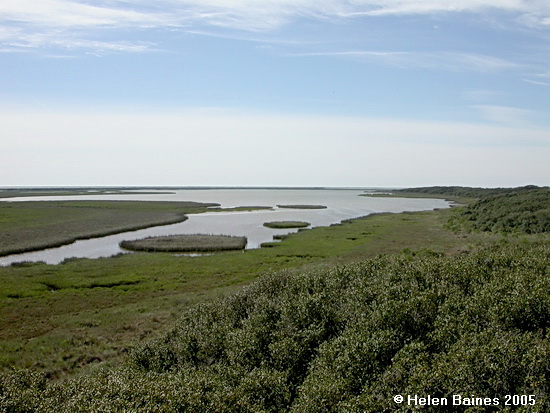 Aransas NWR is one of more than 545 National Wildlife Refuges in the USA, and is managed by the US Fish and Wildlife Service (USFWS). It is one of the most popular birding areas in Texas, famous as the best site in the world for the largest wild flock of the endangered Whooping Crane. In addition, a large number of other birds can be seen there. More than 392 species have been recorded in total, one of the longest birdlists from any of the USA's network of wildlife refuges. 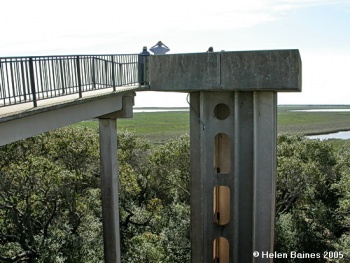 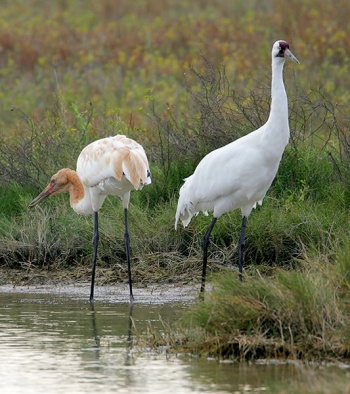 The Whooping Cranes are present from late October to early April and to reduce undue disturbance the interior of the refuge is closed. However, the cranes can be seen with telescopes from an observation tower. Other birds present include Sandhill Crane, Roseate Spoonbill, Wood Stork, White Ibis and White-faced Ibis as well as numerous waterfowl, waders, rails, and Wild Turkey.

The rare Masked Duck is more likely here than virtually anywhere else in the USA. Raptors include Red-tailed Hawk, White-tailed Hawk and Crested Caracara.

Smaller birds are rich and varied and Buff-bellied Hummingbird, Black-crested Titmouse, Carolina Wren and White-eyed Vireo are all easily found. At dusk it may be possible to see Great Horned Owl, Common Nighthawk and Pauraque.

Among the rare birds that have been recorded at Aransas are Clay-colored Robin, Couch's Kingbird and Crimson-collared Grosbeak. Attwater's Prairie Chicken has been extirpated. 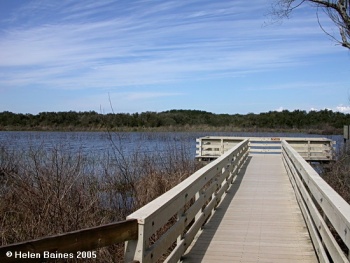 Observation deck on an inland lake
Photo by HelenB 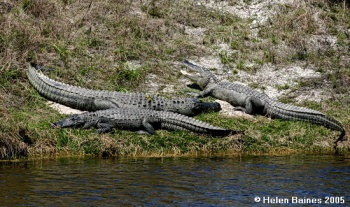 Mammals are also well represented at Aransas and among the most frequently seen are Nine-banded Armadillo, Collared Peccary (locally known as Javelina) and White-tailed Deer with Bobcat and Puma rarely seen.

American Alligator and a variety of turtles can also be seen in the area.

The area covered by the Refuge and now known as the Blackjack Peninsula, was formed 120,000 years ago, during the Pleistocene era. Towards the end of the Ice Age the melting glaciers caused a rise in the sea level and the encroaching sea created many ridges of sand along the Gulf coast. Aransas is the remnant of one of the huge barrier islands so formed. Over the next few thousand years, sediments filled in the barrier lagoons, connecting the island to the mainland.

Indian occupation began 8000 years ago, with Prehistoric people hunting mammoth and bison, and from 3000 BC to 100 AD, the Middle or Archaic Indians were there, but there is little trace of any of these people. Between 1000 and 1850 AD, the Karankawa Indians made the area their home, but unfortunately the early white settlers arriving in Texas in the early 1800's, clashed with the Indians. The Karankawas were a very proud people and they were unwilling to give up their ancestral lands and ways to the white man. By the time of the Texas Revolution in 1835, the Karankawa Indians were almost extinct and one of the last remaining groups was killed in Austwell in 1851.

The name Aransas is thought to have come from the Basque language. According to legend, in 1740 a Basque shepherd saw a vision of the Virgin Mary in a thorn bush and uttered the words: Aranzan zu, meaning "you are sitting in thorns". The Basque word for place of thorns is "aransa".

Early settlers named the area the Blackjacks because of the many blackjack oaks growing there. By the late 1870's, numerous homesteads, farms and ranches, were spread over the peninsula, but the sandy soil was not good for crops, so they raised livestock, causing overgrazing of the land. Ranching continued into the early decades of the twentieth century and in the 1920's the St Charles Ranch imported exotic game, such as Ring-necked Pheasant, California Quail, axis deer, and European boar for hunting.

Tour Loop Drive from the visitor centre crosses some excellent habitat and passes the observation tower.

There are also birding trails close to the visitor center and the observation tower and a boardwalk over an area of saltmarsh.

Directions
To reach Aransas from Rockport, head north on Hwy 35 and turn right (east) to Austwell on FM 774. Turn right again on FM 2040, just south of Austwell. It is about 6 miles to the Refuge gate. Continue to the Visitor Centre to register. For directions from other areas, please see the official ANWR website: [1]

Entry is free if you have an Aransas Annual Pass ($15), Federal Duck Stamp ($25 - valid July 1 - June 30), Annual Pass ($80), Annual Pass for Active Military (free to active military members with proper identification), Senior Pass ($10 to US citizens and permanent residents of 62 and older) or an Access Pass (free to persons with disabilities). Please show to the front desk personnel. Prices correct as off Aug. 2017 - please see the official ANWR website for more details: [2]

Accomodation
There is no public camping available on the Refuge. The nearest campsite is at Hopper's Landing (Tel: 361-286-3331), about 3 miles away. Two RV Parks are located in Austwell (361-286-0232 and 361-286-3523). The nearby towns of Rockport, Fulton, and Port Aransas have plenty of hotels, motels and Bed and Breakfast establishments.

Search for photos of Aransas National Wildlife Refuge in the gallery

HelenB's review:
At Aransas NWR we saw a family group of 3 Whooping Cranes from the 40' Observation Tower in late Feb. 05 - even with a scope they were a long way away. Better views are obtained by taking one of the Crane Boat Tours out of Rockport/Fulton or Port Aransas. Aransas has an auto tour loop, with several birding trails along it.
Pros

Jaeger01's review:
Said it all in the pro's and con's. It is great habitat and even tho, starting to show wear at the seams, still a great birding location.
Pros