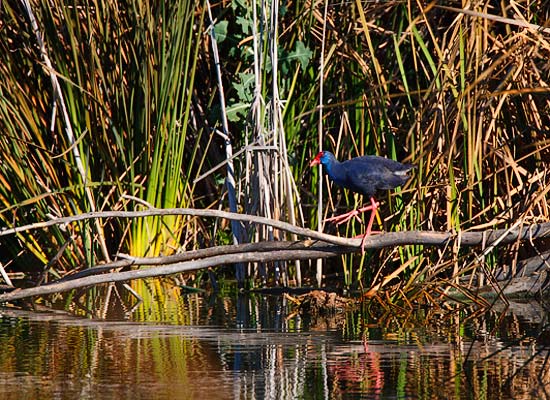 Arrocampo Reservoir is located in the north-east of Extremadura, just off the A5 to Madrid near the village of Saucedilla. There is some confusion as to the naming of this reservoir, as its official name is Embalse de Arrocampo-Almaraz, and Arrocampo reservoir is actually a much smaller lake to the west, but as all visiting birders know the main water body as Arrocampo, we will keep it at that for simplicities sake.

Great White Egret has recently been fairly common here, and recent sightings of a presumed Little Egret/Western Reef Heron hybrid have been a first for this site.

Otters are commonly seen here, especially early in the morning from hide 2.

Arrocampo reservoir was formed by the damming of several small feeder streams, to make a facility providing cooling water for the nuclear power station, finalised in 1983. The level is well regulated, enabling constant perfect conditions for reed beds.

There is now a visitors centre for visiting birders, where you can obtain the key, and site maps for 5 fairly recent hides along the shores of the reservoir. The hides arent particularly well situated, hide number 2 being probably the best, as they are rather far from the waters edge, and much of the birding can be done from the ramps leading to these elevated observation points. The visitors centre is closed on Sunday, but you can get the key from the nearest cafe by the municipal pool.