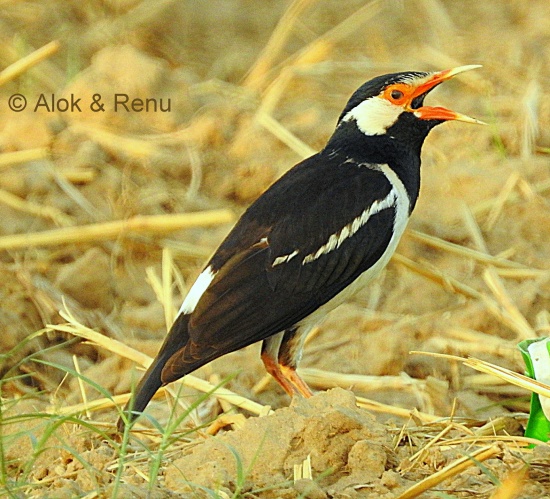 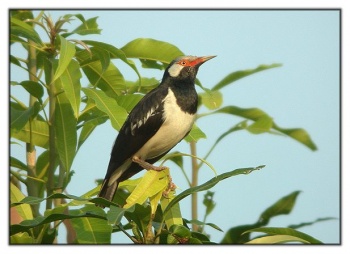 Sexes similar. Juveniles are browner than adults, their cheek patch is dirty white.

From extreme eastern Pakistan to north and central India, southern Nepal, Bangladesh, Burma, southwest China, Thailand, Laos, Cambodia and on Sumatra, Java and Bali.
Introduced around Bombay, in Japan and in Saudi Arabia and the United Arab Emirates.
Common in most of its range. 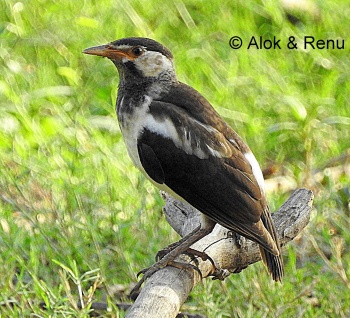 Some authorities place this species in genus Sturnus. 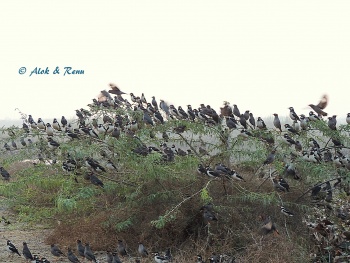 Cultivated areas such as ricefields, open lowlands, especially well-watered cultivated areas, reservoirs and parks and gardens. Mainly in the lowlands.

Forages on the ground, usually in pairs or small groups. In non-breeding season also in bigger flocks of up to 30 birds.

Breeds from February to October in India, May to July in southeast Asia, September to October in Java. A monogamous species, sometimes breeding in loose colonies. The nest is a large domed structure made of twigs, grass stems, rootlets, palm leaves and artifical material (like plastic bags). It's placed 5 to 15m above the ground in a tall tree, an electricity pole or a lamppost. Lays 4 - 6 eggs, 3 in Java.

A resident species with some local movements in extreme northwest of range.

Call given by a small number of individuals feeding on Salvadora persica blossom and fruits, early morning.

Search for photos of Asian Pied Starling in the gallery

Search for photos of Asian Pied Starling in the gallery

Search for videos of Asian Pied Starling on BirdForum TV