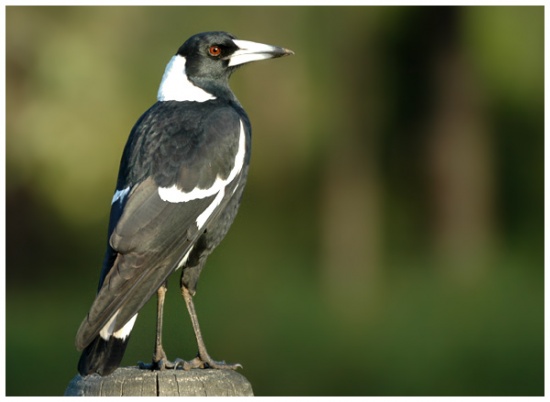 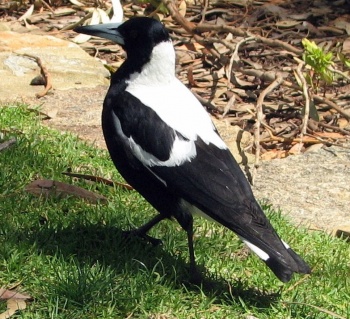 Females are similar to males but the white on the head merges to light grey on collar and rump. Juveniles are similar to females but have a loose and fluffy plumage. They are mottled blackish-brown with buff or greyish-brown barring.
The subspecies differs in size and amount of white on the back.
Comparison picture of G. t. hypoleuca and G. t. tibicen

Found in Australia (including Tasmania) and southern New Guinea. Introduced in New Zealand and Fiji. Common and widespread.

Nine or ten subspecies are recognized for this species. Australian Magpie is not a close relative of Magpies and Jays from other parts of the world. It belongs to the Artamidae family and is most closely related to the Butcherbirds. It has also been placed in the genus Cracticus as Cracticus tibicen. 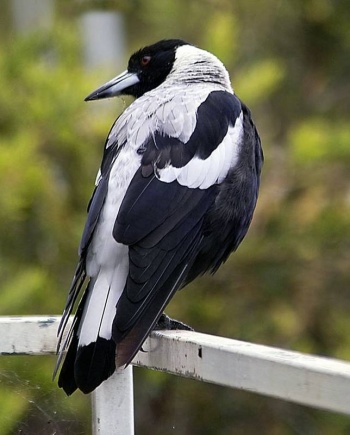 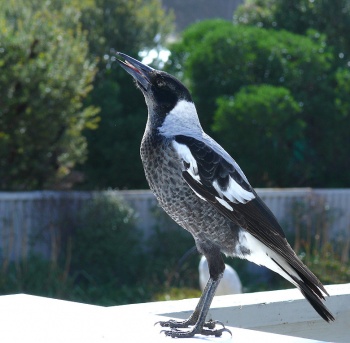 Feeds on invertebrates, mainly terrestrial insects. Takes also small vertebrates (like frogs, lizards, birds or small mammals) and carrion. Feeds mainly on the ground, foraging in groups which spread out over a quite large area. 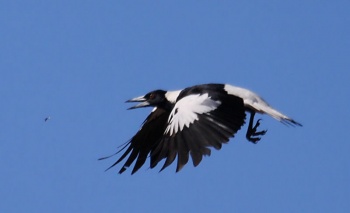 Breeding recorded from June to March in Australia. Timing varies with location and season. A co-operative breeder with immatures or other adults helping but breeding system varies geographically. The female builds a bowl-shaped nest from sticks, lined with grass and bark. It's placed 2 - 20m above the ground in a tree, mainly in eucalypt.Two to five light blue or greenish eggs are laid and incubated for 20 days.

One of the finest songbirds of Australia. Different songs vary with locality and subspecies.

Search for photos of Australian Magpie in the gallery

Search for videos of Australian Magpie on BirdForum TV