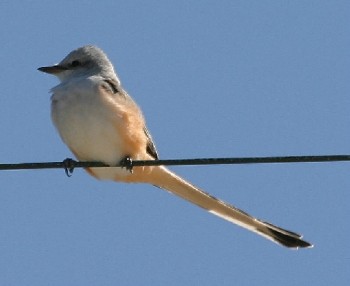 Bald Point SP is perhaps one of the best birding sites in North Florida if not in the entire state. Throughout the year one can enjoy a good variety of species in pleasant surroundings with plenty of peace and quiet.

A rewarding season for the patient and keen observer and can be good for species otherwise scarce in Florida.

The best place to look is offshore at the KOA campground where one should typically see plenty of Northern Gannet, Horned Grebe and Common Loon. Forster's Tern are a plenty as well as the raucous Ring-billed Gull and Laughing Gull. A keen eye will spot rafts of sea-ducks, mostly scaup of both species, Bufflehead and Red-breasted Merganser, but the keener maybe fortunate enough to pick out one if not all of the 3 scoter spp. Although not easy to find at Bald Point the three scoters are reported annually with White-winged Scoter being the most scarcely recorded. Red-throated Loon are often reported but are actually quite rare and Pacific Loon has been recorded.

On the beaches you may find a multitude of shorebirds including Piping Plover (although most are found where on a restricted access section). Other shorebirds commonly seen include Sanderling, Dunlin and Short-billed Dowitcher.

Its worth checking the Bald Point end of the barrier Island for wintering songbirds and sparrows. The latter being what most locals search for. On a good day one can see Vesper Sparrow, Seaside Sparrow, both Nelson's Sparrow and Saltmarsh Sparrow, Grasshopper Sparrow, Savannah Sparrow, Field Sparrow, Chipping Sparrow, White-throated Sparrow, White-crowned Sparrow and Swamp Sparrow with the occassional Henslow's Sparrow and Clay-colored Sparrow being reported. Yellow-rumped Warbler are very common as one might expect but it is worth sorting through them for other overwintering species.

Migration at the point during spring is very contracted but can be rewarding in the right weather conditions. Clear skies over the Caribbean and the Yucatan with south winds combined with a cold front advancing south over the panhandle producing north winds and rain is THE perfect weather for a fallout. However these conditions only happen once every few years so most of the migrants at Bald Point are in small numbers.

All the warblers associated with the eastern half of the country can be expected however some are much scarcer than others. Spring is a good time of year for strays, birds such as Scissor-tailed Flycatcher and Western Kingbird are recorded almost annually. In late spring one of the areas breeding specialities is Gray Kingbird, check overhead wires for this southern species.

can be quiet on the whole but late migrants, rarities and breeding species keep the locals happy. Eastern Whip-poor-will can be heard singing and rarities such as Shiny Cowbird have been recorded at this time of year. Breeding species such as Brown-headed Nuthatch, Seaside Sparrow and Marsh Wren are easy enough to see.

Easily the best time of year at the point. Migration begins as early as August and continues into December. The best period being from mid September to mid October. During this period one can see over 20 species of warbler during the right conditions and the number of birds is simply awesome. Big single species fallouts are possible like last fall when local birder Jack Dozier and I witnessed a spectacle movement of Palm Warbler, easily numbering into the thousands.

It is situated on the Gulf Coast about 45 minutes drive south of state capital Tallahassee near the small fishing village of Panacea. There is a $3 entrance fee at the state park.

Bald Point and nearby Alligator Point are worth a visit at anytime of year. It is easily my favourite birding spot in the whole of Florida and I will never tire of it.

Jack Dozier took the Scissor-tailed Flycatcher pic from his truck, one of 4 that were sitting on the same wire only metres apart - October 2004.

Fall migration was disappointing this year at the point with very few days of good numbers of migrants, due to clear blue skies, southerly or easterly winds and no cold fronts until mid-October. However some interesting birds were sighted this season including Groove-billed Ani, Vermillion Flycatcher and Scissor-tailed Flycatcher. Hawk migration was pretty good this fall with good numbers of Coops and Sharpies moving through.

Steve's review Thanks for taking the time to add this review.

Limeybirder's review Hurricane Dennis had a severe impact on the residents of the island due to a high storm surge. Local birder Jack Dozier had to be rescued by boat and the islands other resident birder had several tropical seabirds including Sooty Tern from his yard! Pros