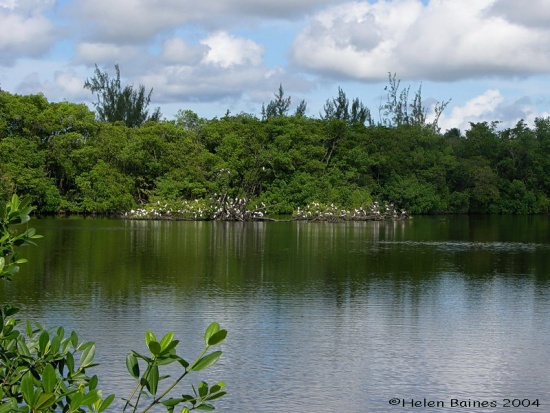 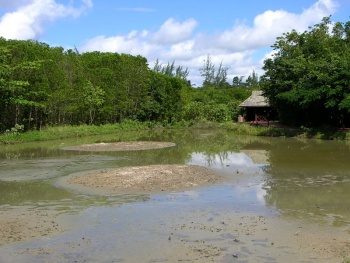 Barbados is 13° North of the equator and 59° West. It is part of the Lesser Antilles island chain in the Caribbean. It's closest island neighbours are Saint Vincent and Saint Lucia to the west. Barbados's total land area is about 430 square kilometres (166 square miles), and is primarily low-lying, with some higher regions in the country's interior (up to several hundred feet elevation). Undeveloped areas of the country contain tropical woodland and scrubland. It is the only island in the Lesser Antilles without a volcanic past, the island originated as elevated sea bed.

The only endemic species is Barbados Bullfinch which in the past was considered a local subspecies of Lesser Antillean Bullfinch. Other notable species are a distinctive subspecies of Yellow Warbler which is found around Graeme Hall Swamp. The largest breeding colony of Little Egret in the western hemisphere is found here. A relatively large number of European species have been seen here, such as vagrant Grey Heron or different ducks. Southern Lapwing is a species which recently was breeding in Barbados after arriving as a vagrant species, but the remaining two birds (2013) seem to be females while the male was shot a couple of years earlier. 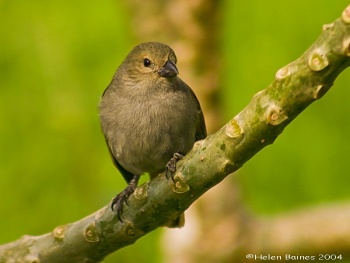 Photo by HelenB
The Barbados Bullfinch, previously considered a subspecies of the Lesser Antillean Bullfinch

African Green Monkey and Mongoose are naturalized on the island.

Wikipedia says that the island was inhabited by Kalinago indians when the British settled here in 1627. There are still plenty of buildings that show the British ancestry, especially churches. The island was initially settled by plantation managers and an African-Caribbean slave population, until slavery was banned in 1834. The island achieved independence in 1966. It is currently the country with the highest population density in the world, with a continuing influx of especially well off immigrants. 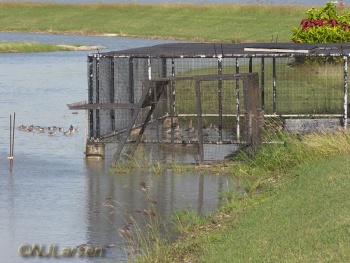 Photo by njlarsen
The cage with captive shorebirds and next to it a flock of wild Stilt Sandpipers at Congo Rd Swamp, a shooting swamp
January 2013

Several shooting swamps exist in Barbados. These are man-made wetlands optimized for shorebird and duck habitat. As the name says, these have been made for hunting, and current local laws allow them to be used for that purpose three months of the year (the fall migration). They are included here because several of them are used for birdwatching at other times of the year. Unfortunately, several of them have a cage with living shorebirds to attract wild birds to the area. Shooting swamps currently (2013) in use include swamps at Congo Rd, Golden Grove, and Alaska (and possibly others).

The Woodbourne Shorebird Reserve (Refuge) mentioned above is a former shooting swamp that is now maintained as a bird sanctuary.

Barbados has a large international airport with direct flights to cities in both Europe, USA, and Canada, and to several other islands in the Caribbean.

Search for photos of Barbados in the gallery

The following 2 pages are in this category, out of 2 total.