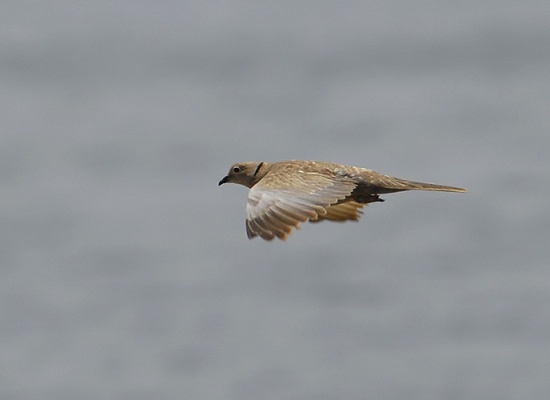 Eurasian Collared Dove is very similar in plumage, but slightly larger, and with a very distinct voice. Mourning Collared Dove (occurs further south, but overlaps slightly in range) differs in having a red (not white) eye ring, and a yellow (not red) iris; it also has a slightly broader black collar. 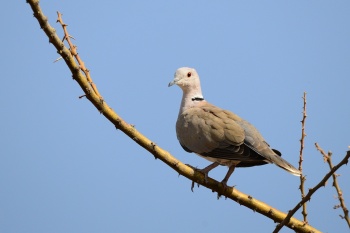 Introduced to New Zealand as a cage bird but has become feral. A frequent escape in the United States, and feral in Hawaii.

Barbary Dove, only known from captivity and formerly sometimes counted as a full species (Streptopelia risoria), is currently believed to be a captive variant of this species. Another interpretation is that African Collared Dove should be renamed to Streptopelia risoria because it is the senior synonym, but this has been ruled inadmissible by the International Code of Zoological Nomenclature as that is a name based on a domesticated animal[2]. Many feral Barbary Dove populations are leucistic to a greater or lesser degree. 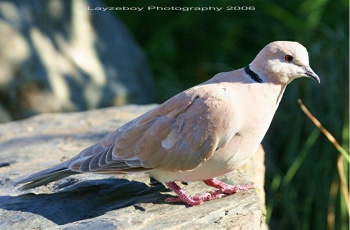 A feral Barbary Dove in New Zealand
Photo by Layzeboy

Noted for their gentle nature.

They eat clover and weed seeds, split grain and newly sown or stubble grain supplemented with occasional invertebrates such as snails.

Breeding is mainly between October and February and they re-nest several times a season. They lay 2 white eggs on a simple platform of twigs. Both adults incubate for about 15 days and the chicks fledge at about 15 days old

Search for photos of African Collared Dove in the gallery