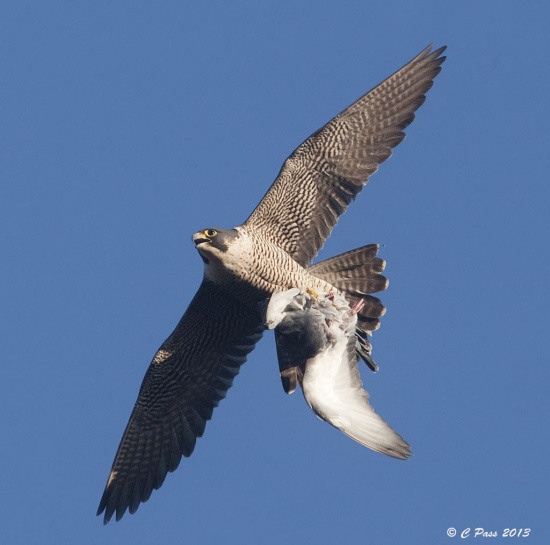 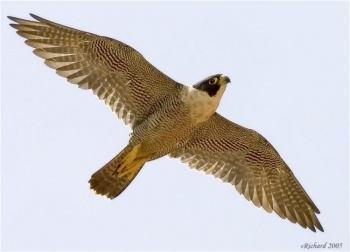 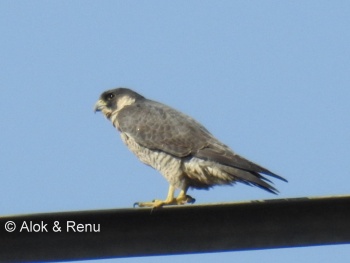 Almost worldwide - the most widely distributed bird of any, absent only from New Zealand and polar regions. See taxonomy, below, for more detail by subspecies.

Large areas of Europe and North America lost all or almost all of their Peregrine Falcons for a period in the late 20th century due to combinations of poisoning by persistent toxic pesticides like DDT and illegal persecution; following restrictions on persistent pesticides, reintroduction and natural recovery has allowed populations to recover in most areas, but illegal persecution remains a serious limiting factor in some areas, notably in upland Britain.

Capture of birds for falconry use has also caused losses in some areas. Conversely, the adoption of tall buildings for nest sites has allowed Peregrine Falcons to expand into urban habitats, often in areas which lacked any natural nest sites.

F. p. pelegrinoides (sometimes together with F. p. babylonicus) has been separated as Barbary Falcon. 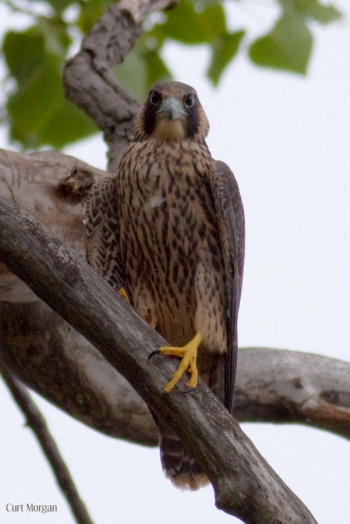 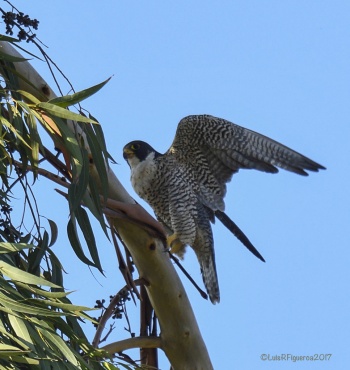 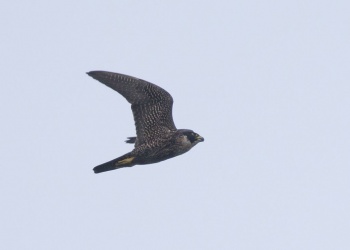 Cliff faces for breeding, hunts over cultivated land and grassland, marshes and wetlands, beaches and the sea. Also increasingly using urban areas to nest/breed on buildings.

Takes prey mainly in the air, using height advantage to gain speed. Typically employs a high speed steep dive (stoop), where reported speeds exceed 200 km/h. Uses the long, 'elasticated' hind toe to hit the bird without injuring itself; the impact of this often kills the prey outright. Also pursues prey such as Feral Pigeon/Rock Dove in flight using speed from a dive and rapid jinking manoeuvering. Only rarely takes prey on the ground or on water.

The diet includes a wide range of birds, such as doves, waterfowl and songbirds, including birds as large as Great Black-backed Gull and Brant Goose, up to 2 kg weight. Occasionally hunts small mammals, including bats, rats, voles and rabbits. Insects and reptiles make up a relatively small proportion of their diet. Exceptionally, Peregrine Falcons have been known to eat their own chicks when starving.

A scrape on a cliff ledge is made and 3-4 eggs are laid. The females incubate the eggs for 29-32 days. Chicks fledge 35-42 days after hatching. It is increasingly using urban high-rise buildings and churches for nest/breeding sites, to prey largely on Feral Pigeons.

Most of the subspecies are resident, but F. p. calidus and F. p. tundrius migrate long distances south to avoid the arctic winters experienced in their breeding ranges.

Search the Gallery for Peregrine Videos: