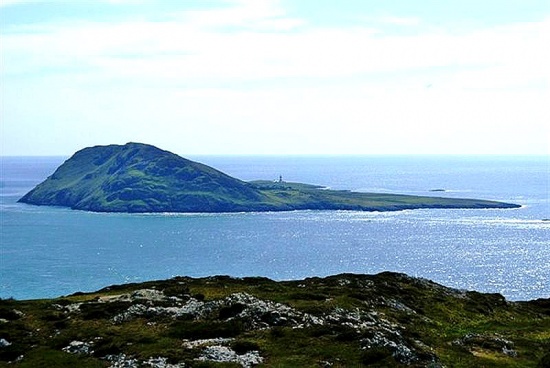 Photo by Shirley Roulston
Bardsey Island from the Llŷn Peninsula, May 2009

Bardsey is a small island, 180 hectares in size, situated off the Llŷn Peninsula at the north-western tip of Wales, famous as the site of a bird observatory and also as the ancient burial ground of thousands of saints. The island is a privately owned nature reserve and consists mainly of grassland fringed by rocky cliffs. The southern tip of the island is a peninsula with a lighthouse, linked to the main part by a narrow isthmus and the highest point is over 160m. 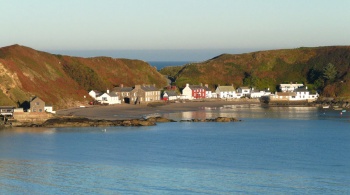 Although it is best-known as a site for migrants, Bardsey has good seabird colonies with breeding Manx Shearwater and Northern Fulmar, Shag, Common Guillemot and Razorbill. Other breeders on the cliffs include Peregrine Falcon, Northern Raven and Rock Pipit and this is one of the Welsh strongholds of Red-billed Chough.

Migrants regularly seen on Bardsey include various chats, warblers and flycatchers but the island has an excellent record for turning up rarities. Hoopoe, Woodchat Shrike, Firecrest, Yellow-browed Warbler, Icterine Warbler and Melodious Warbler are among the rarer migrants that appear with some frequency.

Sooty Shearwater is regular offshore in small numbers in autumn and Leach's Storm-petrel seen on occasion.

Exceptional rarities have included the only Western Palearctic record of Summer Tanager as well as Blackpoll Warbler and Yellow Warbler, Sora Crake, Rose-breasted Grosbeak, American Robin and Grey-cheeked Thrush from North America and Pallas's Warbler and Dusky Warbler and Yellow-breasted Bunting and Black-headed Bunting from Asia.

Black-browed Albatross, Long-tailed Skua and Sabine's Gull and Bonaparte's Gull are among the unusual seabirds recorded off Bardsey.

Rabbit Oryctolagus cuniculus are abundant on the island and Grey Seal Halichoerus grypus are common in the surrounding seas where Common Porpoise Phocoena phocoena are regularly seen and several dolphin species have been recorded.

There are no reptiles and the sole amphibian is Palmate Newt Triturus helveticus.

April to early June and late August to late October are the best times to visit to see migrants.

Bardsey is a National Nature Reserve. The Bardsey Bird and Field Observatory was established in 1953 and it is the only accredited bird observatory in Wales. Prior to 1953, the first serious records were collated by Eagle Clarke from notes kept by the lighthouse keepers between 1879-1887. In 1954, A. Till, a resident lighthouse keeper, was enrolled as an honorary warden of the Observatory, but after 1954 the Wardens were salaried, beginning with R. Thearle. The lighthouse was built in 1821.

The best time to visit Bardsey is between April and October. Check out the "When to Come" section on the Bardsey Bird & Field Observatory website (see External Links, below), where each month has a breakdown of what you are likely to see.

Bardsey can be reached by a 2-3 hour boat-trip from Pwllheli leaving at 08.30 every Saturday.