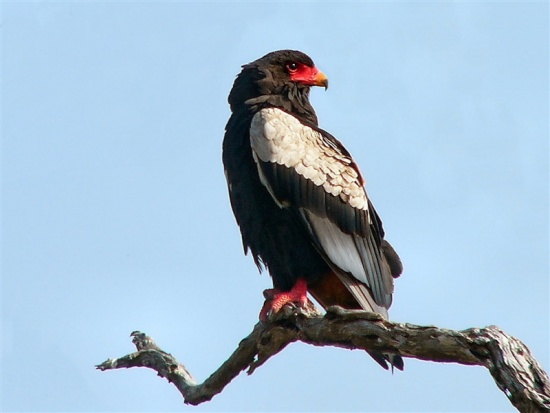 Adult: The Bateleur's head, neck, breast, greater upperwing-coverts and belly are black, lesser wing-coverts tend toward brown with whitish edges. Its back, undertail-coverts and tail are a chestnut colour, while the underwing-coverts are white. The bateleur's brown eyes are surrounded by facial skin that is a strikingly bright red, and devoid of feathers. As if to give a sense of artistic balance, the legs are the same brilliant red as the face.

In flight: Notice the short tail, shorter in adult than in juvenile/immature birds. Furthermore, the Bateleur has 25 secondaries, much more than some of the confusing species. Immature birds show greyish remiges with blackish fingers and a dark subterminal band at the trailing edge of the wing and the greater upperwing coverts form a dark band across the wing 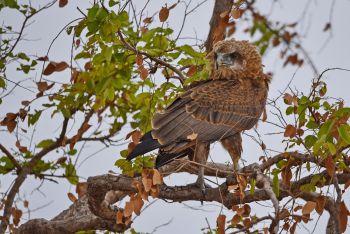 Breeds widely over sub-Saharan Africa from Senegal east to Sudan, Ethiopia and western Somalia and south to northern South Africa. Also resident in a limited area of the south-western Arabian Peninsula.

Not migratory in African range but some dispersal may occur.

Recorded as a vagrant in Israel (about six records), Iraq, Egypt and Sinai and Tunisia. Also recorded in Europe but these are undoubtedly escapes. 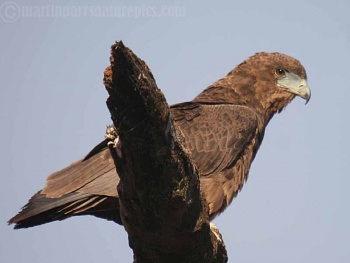 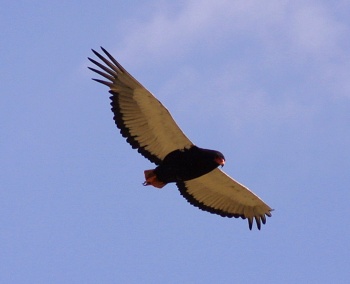 Pairing is for life, and a pair will use the same nest tree and nest for a number of years. The nest is often in a riparian zone or in a woodland but it may be in a large isolated tree, especially thorny acacia or the baobab. It is built into an area of the tree that will shelter it. It is not open to the sky. It is of heavy sticks with a deep cup lined with green leaves. Both sexes build the nest, and the male assists at times in the incubation and brooding.

Bateleurs lay one unspotted, chalky-white egg during the dry season. It is incubated for 52 - 55 days, but is often left unattended while both parents forage. The male may feed the female near the nest. If he does bring food there is sometimes an aerial food pass. Both sexes bring food to the chick. The chick's first flight is usually around 110-115 days, often without the parents present, and the first attempt may be a real flight, even up to a kilometre.

Sexual maturity is reached after about 7 years, and the adults may live 20 - 25 years.

Single adults are sometimes seen - and tolerated by the nesting pair - around the nest site. This individual will often roost with the mated male, and may even patrol when the parents are disturbed by intruders, but it does not help the nesting parents or the young in any obvious way.

Search for photos of Bateleur in the gallery