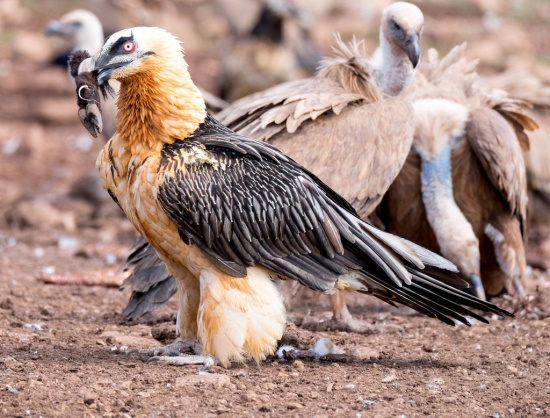 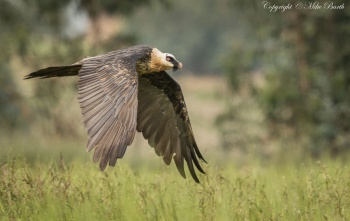 Length 105-125 cm (37-49 inches), wingspan 250-282 cm (100-110 inches), weight 4.5-7.1 kg
Adults have a rust-coloured head and underparts, the former with the black moustache which give this species its alternative name. The body feathering is actually white*, but the birds deliberately stain the white feathers rust-coloured by dust-bathing in iron-rich soil. As the availability of iron-rich soil varies from location to location, and the amount of effort individuals put in to dust-bathing also varies, birds vary widely from pale buff to intense orange-red (* as can be seen in a captive bird here with no access to rust). The tail, wings, and back are dark slate-grey.


Juveniles are dark all over with a blackish head and neck, grey underparts and mantle, and blackish wings and tail (pattern reminiscent of a gigantic Hooded Crow); they take five to seven years to reach full maturity, with slow progress toward adult plumage; the head is the last to attain full adult pattern.

It is unlike most other vultures in flight, due to its longer, narrower wings tapering toward the primary tips, and long, wedge-shaped tail. Egyptian Vulture is most similar in flight shape, and immatures in particular can be confused where the Bearded Vulture's huge size is not obvious; at long range best told by its relatively shorter tail and less tapered wings. 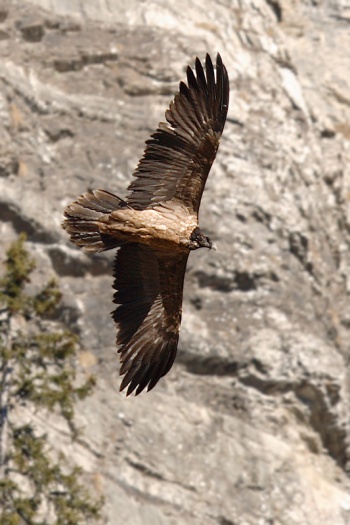 Mountains of Europe, Africa and Asia.

The rarest breeding vulture in Europe, breeding in the Pyrenees, in Greece and the northern Caucasus, and in very small numbers in Corsica and Crete. A reintroduction programme began in the Alps in 1986 with the first breeding in 1997, this population now numbers about 200 and birds are regularly seen in France, Switzerland, Austria and Italy. In 1998 fully wild Lammergeiers successfully bred in the French Pyrenees.

In the Western Palearctic breeds most commonly in Turkey with relict populations in Sinai, possibly also Israel and northern Iraq. Also breeds in the south-west of the Arabian Peninsula and range extends east from the Caucasus across northern Iran to Pakistan, north into Central Asia, the Himalayas, Tibet and north-west and central China.

In Africa breeds in the mountains of Morocco and Algeria, also in eastern Egypt and south to eastern Sudan, Ethiopia and the mountains of Kenya and Tanzania. In southern Africa occurs in Natal, Lesotho, Orange Free State and the far north of Cape Province.

In the Western Palearctic vagrants recorded in Portugal, Germany, Switzerland, the Czech Republic and Slovakia, also Bulgaria and the Ukraine, Cyprus, Syria and Lebanon.

In 1994 a bird from the Alpine reintroduction programme was found on the Atlantic coast of France, in 1998 two were seen in the Netherlands, in 1999 another was recorded in Denmark. In May 2001 an immature was found on the German Baltic island of Rügen, and in 2002-3 there were further Dutch records. Occasionally seen at Gibraltar. In China a vagrant to Hopeh, Shansi and Hupeh. 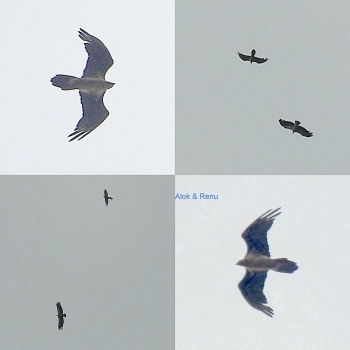 Up to four subspecies have been recognised:

Clements1, IOC2, and HBW3 recognise only G. b. barbatus (north Africa and Eurasia) and G. b. meridionalis (Arabian Peninsula, and eastern and southern Africa), with the other two treated as synonyms of G. b. barbatus2.

A recent phylogeographic and genetic study4, however, indicates that Asian birds are more closely related to eastern and southern-African birds than they are to most European birds. The authors of that study do not feel that it is appropriate to distinguish subspecies.

Mountains. In Europe usually at 1,000-2,500m altitude; found in areas with cliffs, deep valleys and high ridges, nests on inaccessible cliffs or small caves, and requires presence of chamois, ibex, wild sheep, or other medium-sized ungulates for carrion. In the Himalayas has been seen above 7,000m. In Ethiopia, has become somewhat commensal with man, taking bones put out for them from abbatoirs; also visits vulture feeding stations in Europe.

Like other vultures it is a scavenger, feeding mostly from carcasses of dead animals. It usually disdains the rotting meat, however, and lives on a diet that is 90% bone and bone marrow. It will drop large bones from a height to crack them to get smaller pieces. Its old name of 'ossifrage' ("bone-crusher") relates to this habit. Live tortoises are also dropped in similar fashion to crack them open.

It breeds on crags in high mountains in southern Europe, Africa, India and Tibet, laying one or two eggs in mid-winter which hatch at the beginning of spring. They breed from mid December to mid February, laying one to two eggs, which hatch between 53 and 58 days. Only one chick survives, spending 106 to 130 days in the nest, before flying out on their own, and taking up to 7 years to master the art of bone breaking.

Bearded Vultures are silent apart from shrill whistles at the breeding crags.

Adults are strictly resident and, while immatures may wander, they very rarely leave mountain areas.

Search for photos of Bearded Vulture in the BirdForum Gallery

Search for videos of Bearded Vulture on BirdForum TV