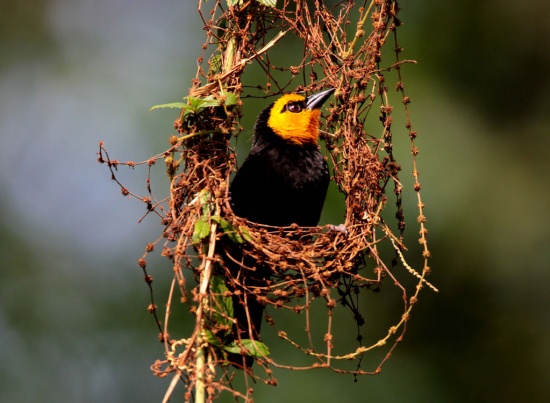 Male of the nominate race melanogaster: 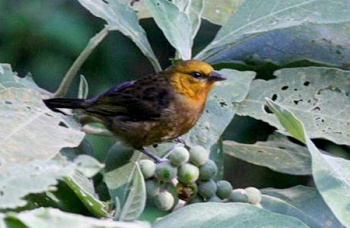 Male of the race stephanophorus:

Their diet consists mostly of insects such as ants, termites and beetles, and sometimes fruits and seeds. Foraging takes place in undergrowth and the middle levels of thick secondary bush. Usually done singly or in pairs.

Breeding is monogamous and solitary, not colonially. Both adults build the retort-shaped nest which is woven from tough grass stems, lined with finer material and suspended about 3-6 m above the ground or over a forest stream. The opening is below and has a ledge to prevent the eggs from falling out, but there is no tunnel. The clutch of two eggs, white with very fine, even, pinkish-brown spots, are incubated by the female, but both parents feed the young. Breeding times vary with the location of the species, e.g. December in Nigeria, January-April, June and September in Kenya and November-March and August in Sudan.

The song consists of clear ringing notes, then a drawn out snoring sound: “da du da du dzirr”, somewhat similar to a sunbird (in the Nectariniidae family). The call is a rapid, harsh “zhink zhink zhink”.

Search for photos of Black-billed Weaver in the gallery