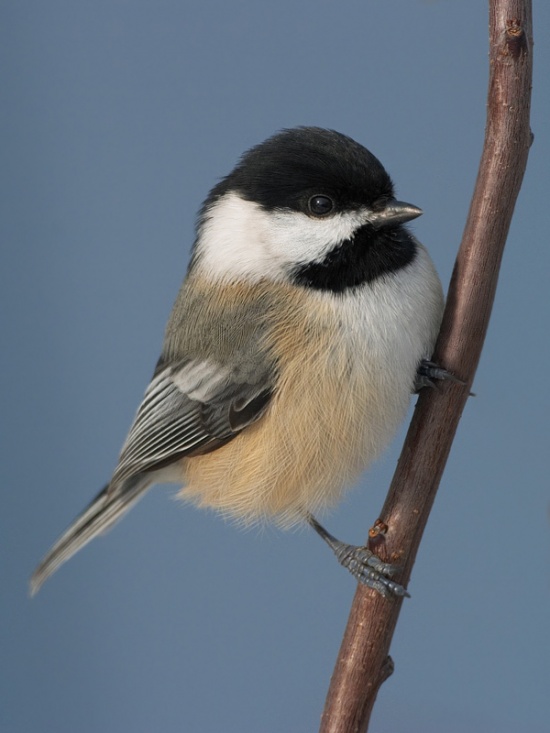 Most similar to Carolina Chickadee. These two species hybridize in a narrow zone of overlap.

Winters south to Maryland and Texas. 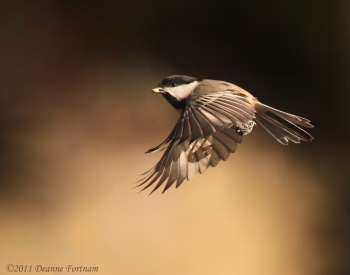 This is a polytypic species[1], consisting of nine subspecies:

Very active birds. Hop. Often feed upside down whilst clinging to twigs and branches. Form mixed winter flocks, with woodpeckers, nuthatches, creepers, and kinglets. Very tame and inquisitive and often seen at feeders. In spring, chickadees disband into the woods to nest.

Recent research sheds light on the ability of Poecile atricapillus to survive severe winters without migrating. They roost in small holes in trees, preferring Birch where available, e.g., around Fairbanks, Alaska. The birds go into a state of semi-hibernation for the night, conserving energy by lowering its body temperature by 12 to 15 degrees F. During the day, it is capable of eating 60% of its body weight, and can start the day with no body fat, but metabolize all that food to stored fat by nightfall. It then shivers through the night, burning the fat; up to 10% of its total body mass.

The researchers also found that the birds survive better when there are feeders in the area, but do not become dependent on them.

Black-capped Chickadees usually prepare their own nesting hole in soft, rotting tree stumps. Enticing them into breeding boxes is difficult, although it sometimes help to fill the boxes with wood shavings, which deceives the chickadees; they carry the wood shavings out bit by bit and accept the box for nesting. 6-8 brown-speckled white eggs in a cup of grass, fur, plant down, feathers, and moss, placed in a hole in a rotten tree stub excavated by the birds, or in a natural cavity or bird box.

A buzzy chick-a-dee-dee-dee or a clear, whistled fee-bee, the second note lower and often doubled sounding like cheese-bur-ger or "hey-sweetie. The "hey-sweetie" song has a few unusual features:

As background, perching birds can be divided into 2 major groups, the Oscines, or "true" songbirds, and the Suboscines, represented in North America by the flycatchers. Most suboscine birds are genetically programmed to sing a certain song. If you raise a willow flycatcher baby in a lab and only let it hear alder flycatcher songs, as an adult it will still sing perfect willow flycatcher songs.

Most oscine songbirds learn their songs, copying the adults around them. Just as a person growing up in New York develops a different accent than a person growing up in Georgia, so most songbirds develop regional “dialects”. For example, in the Point Reyes National Seashore in California alone, 6 separate white-throated sparrow dialects have been mapped

The usual black capped chickadee song is a 2 part whistle. The first note has a higher pitch than the second note and decreases slightly in pitch as it is sung, which may be important for species recognition. The second note has a decrease in amplitude in the middle of it, so it comes across as 2 “syllables”. The song is described by various authors as sounding like “fee-bee-ee”, or “hey-sweetie”. There are several strange things about this song. Chickadees have been recorded across the continent, from Alaska to Maine, and with rare exceptions the song is exactly the same across the continent, without dialects. Why the song is so similar across the continent is unclear. One possibility, that it is genetically programmed into the birds just as it is in flycatchers, was ruled out in experiments where chickadees were raised in captivity, and developed very abnormal songs. Surprisingly, on Martha’s Vinyard, Chappaquiddick and Nantucket, there are four separate chickadee dialects, where in some locations the birds sing “sweetie-hey” , “sosweetie-sweetie”, sweetie-sweetie” or the usual hey-sweetie. There are also dialects in isolated areas in Washington and Oregon, but otherwise it’s the same song across the rest of the continent. A thoorough discussion of this can be found in Dr Donald Kroodsma's book "The Singing Life of Birds".

Another unusual thing is that that most songs function to defend territory and to attract mates and are only uttered in the breeding season but the chickadee song is sung year-round. Chickadees pair-bond while in their winter flocks. Males in winter flocks do sing the “hey-sweetie” song, but usually only after removing themselves away from the flock and it doesn’t seem to play a role in attracting mates. In one study on this, the song was never sung by a male when he was within 10 meters of his mate. During the breeding season the song serves an unusual function. To quote from an article on this, the song is “not serving as a distant threat to other males, but rather as a means of locating the rival, challenging and beckoning him to a meeting site rather than as a means of repelling him from a fixed boundary.” Once a rival male does appear, the bird may shift his song to a lower frequency, which is apparently an aggressive signal. If the birds approach closely to one another, the “hey-sweetie” song is dropped altogether and the birds utter a two to thirteen note call called the “gargle” call. This is a battle cry, and if one bird does not depart a fight will break out. Interestingly, gargle calls do have regional dialects and each chickadee has a repertoire of different gargle calls.

Just as the words “Love” and “Leave” have similar letters but different meanings, so the gargle call is also used in another context, in copulation. It is sometimes preceded by a high pitched “see” and is given during mating, although with very specific note combinations. To quote from some research on this, “We observed the complete copulatory sequence 8 times... either sex initiated sexual activity by uttering variable sees, often while quivering the wings. The male then continued Variable Sees, ending in a gargle just as he mounted the female. All copulations were preceded by these calls.” To continue, “We found remarkable stereotypy in the sexual Gargles for each population, although the agonistic gargles in each population are highly variable... Although both share the same syllables, sexual gargles have unique syllable combinations that may reduce the possibility of confusion concerning the message of the calls. Following agonistic Gargles, the recipient usually moves away; if it does not, it is attacked by the individual giving the call. During sexual gargles the two birds remain in close proximity.” Thus the gargle call functions more like a traditional "song" than the "hey-sweetie" song does. Obviously this scratches the surface of understanding chickadee vocalization, but we are learning how these birds communicate and interact. [2]

Search for photos of Black-capped Chickadee in the gallery