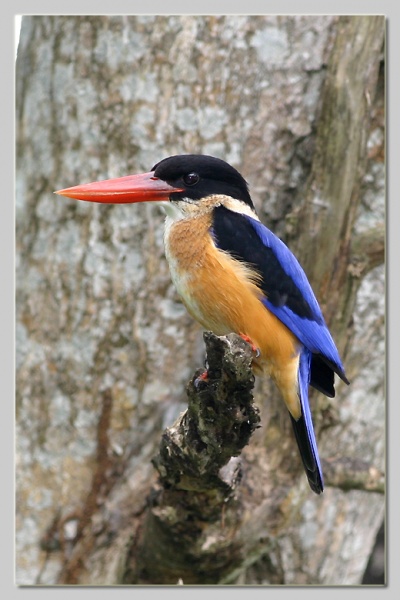 Size 28cm (11 in)
Black head and rufous belly and flanks separated by white throat and collar. Bill bright red, purple-black upperparts.
Juveniles are duller, have a buffy collar, dusky scaling on breast and a brownish-orange bill.

In flight shows conspicuous white patch at base of primaries.

White-throated Kingfisher differs in lacking the white collar on the rear neck, brown on head con-color and connected with the flanks, brown on part of the wing coverts, lacking the darker base of the bill, etc. but shares the white throat and the white patch on wings. 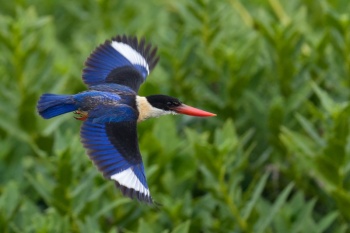 Breeds in Indian subcontinent, Myanmar, China and Korea.
Winters throughout southeast Asia to Sumatra, Borneo, Sulawesi and the Philippines.

This is a monotypic species[1].
It forms a superspecies with Grey-headed Kingfisher. 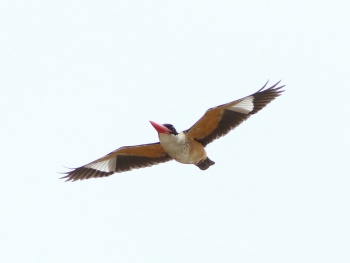 Territorial in its wintering quarters; it is aggressive and often displaces the resident White-throated Kingfisher. Shy.

Starts breeding in April in India, from April to May in Burma, in June in Korea. The nest is placed in a self-dug tunnel in an earth mound, a cutting or a streambank. Lays 4-5 eggs.

Not as vocal as White-throated Kingfisher.
Has a unique ringing cackle; kikikikikiki.

Search for photos of Black-capped Kingfisher in the BirdForum Gallery

Search for videos of Black-capped Kingfisher on BirdForum TV