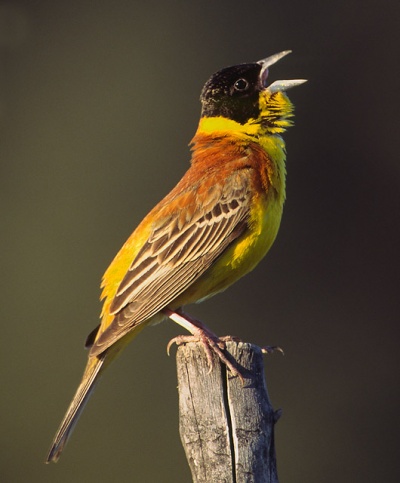 The females are much duller although they often show at least a hint of yellow, especially on the undertail coverts and the head is usually distinctly darker than the throat, creating a hooded effect which mimics the pattern of the male.

Otherwise they look like big, fairly long-bodied buntings with an obvious white eye-ring, rather sandy-brown plumage, a striking pale wing panel and a rich chestnut coloured rump. The lack of white outer-tail feathers also separates them from most other buntings. 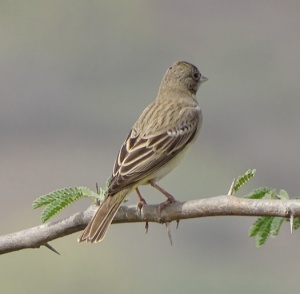 Female and immature birds are very similar to Red-headed Bunting.

Common in the south-east of the Western Palearctic, breeds on the east coast of the Adriatic from Slovenia to southern Greece, also in south Serbia and Macedonia, the Aegean coast of Greece and most islands, European Turkey, Bulgaria and north on the Black Sea coast to the Danube Delta. In Turkey breeds almost throughout (except north coast) and east to northern Iraq and Transcaucasia. Absent from the Caucasus but occurs further north from Crimea and eastern Sea of Azov east to the Caspian. Also breeds on Cyprus and in the Middle East south to northern Israel and west Jordan. 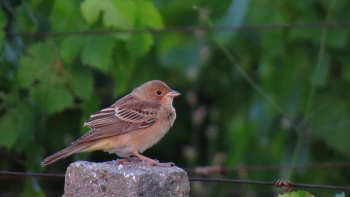 Increasing and now fairly widespread in Italy and records from south-east France have increased in recent years culminating in the first proven breeding there in 2000.

Frequent vagrant outside usual range and recorded throughout Europe north to Iceland, Scandinavia and Estonia, and west to Spain and North-West Africa. British records (c.166) mostly in May-June, also in July-October, the majority occur in Shetland, others well-scattered throughout Britain.

Also recorded in the Channel Islands.

They breed in open areas with scattered trees, bushes and hedges. They are found from sea-level to around 2000 m.

The male performs a song display flight.
There may be more than one brood.

Their diet consists of seeds, with the addition of invertebrates during the breeding season, particularly mayfly larva.

Search for photos of Black-headed Bunting in the gallery

Search for videos of Black-headed Bunting on BirdForum TV