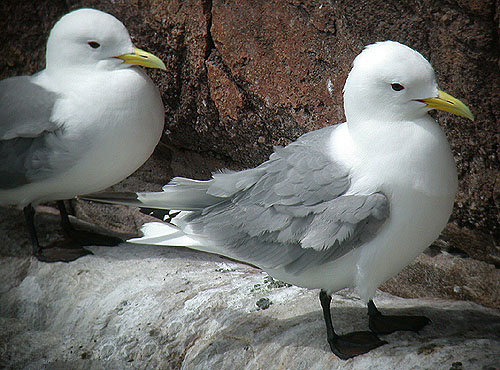 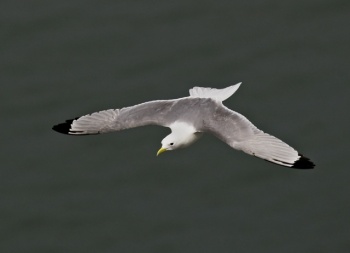 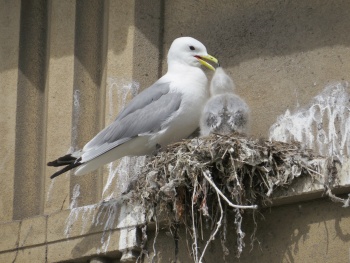 Adults distinguished from similar-sized gulls like Common Gull or Short-billed Gull by the black wingtips lacking any white 'mirrors' (spots). Juveniles are often confused with Sabine's Gulls as they have a similar wing pattern, but can be distinguished by their different head pattern, and with experience, their subtly different wing shape and action in flight, typically gull-like unlike Sabine's Gull narrower pointed wings and more tern-like flight.

In Europe breeds around Iceland, the Faroes and Britain (absent from much of south and east where coasts lack suitable cliffs), coastal Norway and the north of the Kola Peninsula. In the far north breeds on Jan Mayen, Svalbard, Bear Island, Franz Josef Land and Novaya Zemlya. Also breeds locally in small numbers in northwestern Denmark and Germany, the Channel Islands and northwest France, the north-western tip of Spain and at one site in Portugal. In the North American Atlantic breeds from Greenland, and southern Baffin Island to Nova Scotia in Canada. The Pacific Ocean populations breed round most of the Alaskan coast (except the far northeast and far southeast), and round the coast and islands of eastern Russia from the New Siberian Islands south to the Kurile Islands and Sakhalin. 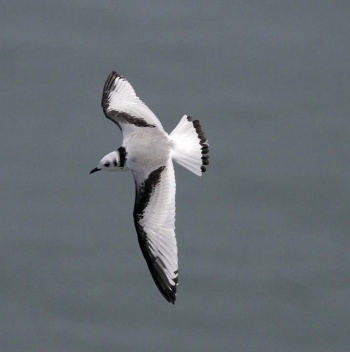 Colonies are occupied from late March (earlier in the south) to early September, dispersing after breeding. In winter occurs widely across mid-latitudes of the Atlantic and Pacific Oceans from the breeding range south to about Morocco and the Mediterranean east to Italy, in the eastern Atlantic, to around Cape Hatteras, North Carolina in the western Atlantic, to Baja California in the eastern Pacific, and to central Japan in the western Pacific. Birds from Britain often cross the Atlantic to feed off Greenland and Newfoundland after the breeding season.

Has occurred as a vagrant to most European countries, the Middle East including Aqaba in Jordan and the Persian Gulf in Oman, north Africa, the Canary and Cape Verde Islands, South Africa, and also to the coasts of China (including two records from Hong Kong), Thailand, India, and most inland states in the USA. A truly astonishing record involved an adult in December 2016 on Borit Lake, Gilgit, Pakistan (Birdforum thread) - a remote mountain lake at 36.430°N 74.863°E, 2,650 m altitude and surrounded by the 7,500 m peaks of the Karakoram, 5,000 km from anywhere Kittiwakes usually occur. 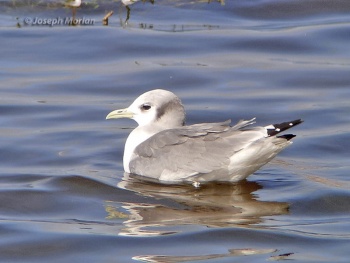 The two subspecies may not be fully isolated, with e.g. two ringing recoveries of birds from Novaya Zemlya (in the range of the nominate subspecies) in Kamchatka (in the range of R. t. pollicaris). Mixing can be expected to increase as the Arctic ice cap melts with global warming.

When not breeding occurs at sea often far from land. Sometimes seen at freshwaters near the coast or far inland after severe weather.

By far the most abundant gull in the world, with an estimated population of 6–7 million pairs, divided roughly equally between the Atlantic and Pacific Oceans. Recent declines noted in some areas. 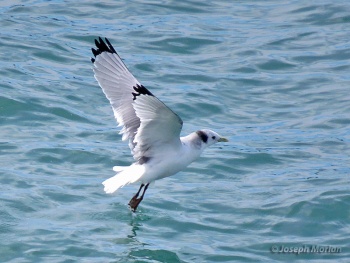 Breeds on steep sea-cliffs, stacks and rocky islands, in some areas also on buildings. Can build nests on ledges just 4–5 cm wide; narrower ledges are preferred as they give greater safety from predators. An unusual urban colony is found on the River Tyne in northeast England, where the birds fly 16 km upriver to nest on city centre buildings in Newcastle upon Tyne (Northumberland) and adjacent Gateshead (County Durham).

Post-breeding dispersal from colonies to open ocean, usually well away from coast.

Search for photos of Black-legged Kittiwake in the gallery