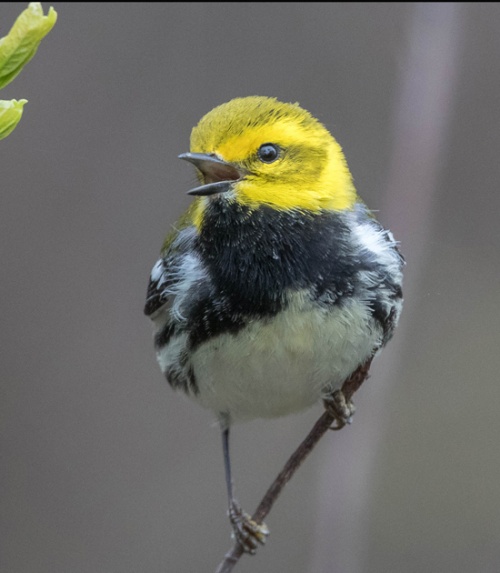 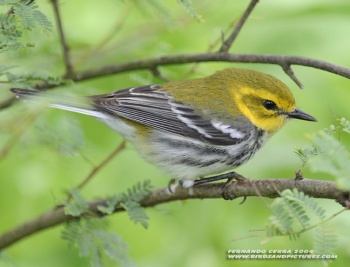 In the west, the two most likely confusing species are Townsend’s and Hermit Warblers. Hermit usually has plainer face, greyer back and lacks streaking on the sides. Townsend’s has a more contrasting face, often streaking on the back and usually a much more yellow upper breast.

Either a very dull immature Townsend’s or a Hermit × Townsend’s hybrid are likely to cause the most confusion. In these and all cases the wash of yellow across the vent just behind the legs is diagnostic for Black-throated Green.

Golden-cheeked Warbler differs in having no yellow on the underparts, darker upperparts (black in males), and a narrower black line through the eye. 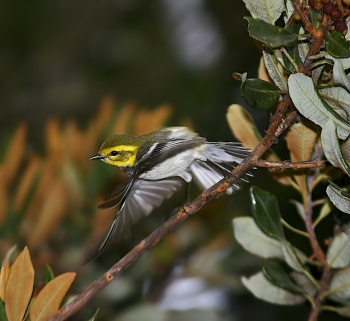 Breeds from Saskatchewan east to eastern Quebec and Newfoundland; northern Minnesota and Michigan east to Pennsylvania; also along the Appalachians south to northern Alabama, and along the Atlantic coast south to South Carolina.

Winters east Mexico to central Panama. Also winters in the southern tip of Florida. Rare but regular vagrant in the western United States.

This is considered a monotypic species by most authors[1][2], but some accept two subspecies[3]:

Breeds in open coniferous and mixed forests; also in cypress swamps in the coastal Carolinas. Observed at heights around 2,195 m.

The nest is an open cup and usually placed in the fork of a tree. The clutch consists of three to five eggs.

Diet is mainly insectivorous, including arthropods and caterpillars. They also eat berries.

Song: A buzzy zoo-zee-zoo-zoo-zee and other variations

Search for videos of Black-throated Green Warbler on BirdForum TV