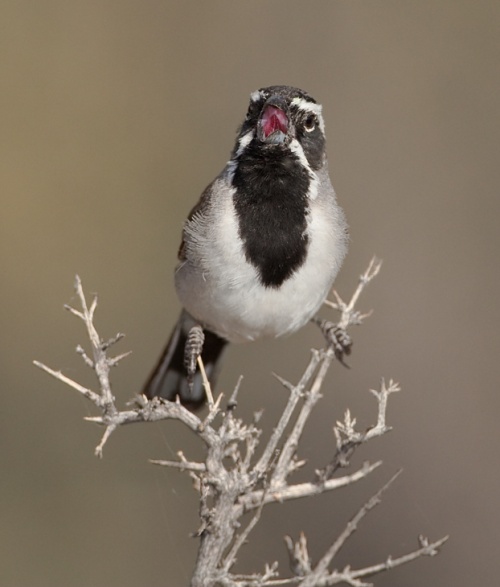 12-14 cm (4.7-5.5) in, 11-15 g
Gray-brown above, white below, with striking black throat and breast; 2 conspicuous white stripes on sides of head, 1 above and 1 below the eye.
Sexes alike.
Juvenile has a white throat and streaked breast, reminiscent of Sagebrush Sparrow, but note longer more extensive white eyebrow on Black-throated. 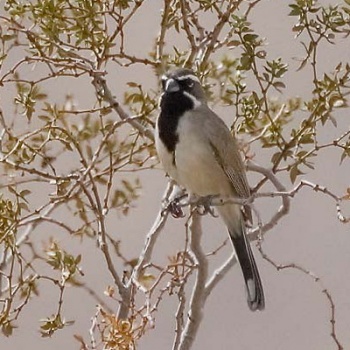 There are 10 subspecies, 4 of which are confined to islands in the Gulf of California[1]: 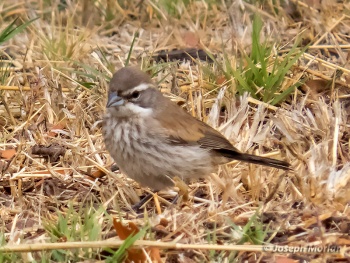 This species has adapted itself well to a life in the extreme habitat of its home range and is very tolerant of the heat and drought.

After the rainy season, they scatter into small flocks

Consists of seeds vegetable matter and insects, which provide all the moisture they need, though they will take advantage of water holes when available.

They raise their young in the dry upland desert.

Song: a series of two opening notes followed by a buzz or trill, or sometimes several.

Search for photos of Black-throated Sparrow in the gallery