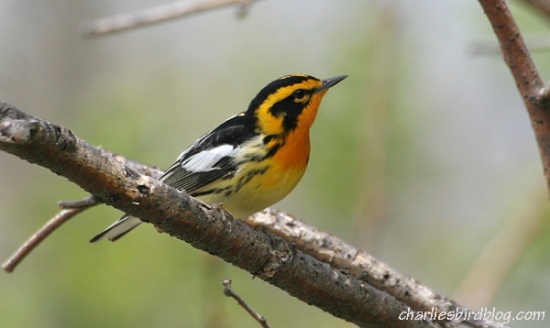 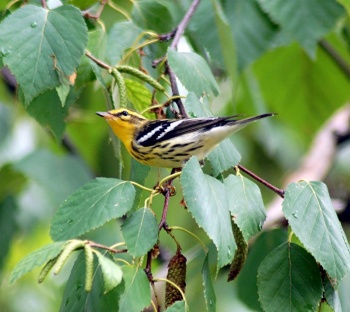 Female and Immature Male: Similar to male, but has yellow throat, 2 wingbars instead of wingpatch, and lighter auriculars.


Autumn plumage identifiers are the 2 white wing bars and yellowish tinge to patch on front of crown, supercilium, sides of neck, throat (surrounding the auriculars), breast and upper flanks.

In Costa Rica, Flame-throated Warbler is the only other wood warbler with an orange throat but has no white on the back or in the wings.

Breeds from Saskatchewan east to Nova Scotia, south to Great Lakes, southern New England, and in the Appalachians to northern Georgia. Widespread in east and midwest in migration.
Winters in the tropics from Costa Rica south to Peru and Bolivia.
Rare but regular vagrant to the western United States.
Accidental vagrant to Greenland (2 records), Iceland (1 record), and Great Britain (2 records). 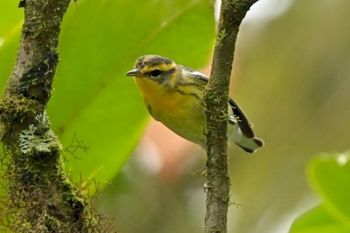 This is a monotypic species[1].
Formerly placed in genus Dendroica.

Most numerous in mixed forests of hemlock (Tsuga), spruce (Picea), and various hardwoods, usually ranging high in trees; in winter in cloud forests and humid tropical montane forests. In migration found in nearly any type of woods.

They usually spend their time gleaning in the upper canopy.

Their diet during the breeding season consists almost entirely of insects and smaller invertebrates, particularly spiders, beetles and caterpillars. During the winter they add fruit and berries to their fare.

The clutch consists of 4 brown-spotted white eggs which are laid in a twig nest lined with lichens, mosses, and hair, usually placed high in a large conifer.

Search for photos of Blackburnian Warbler in the gallery