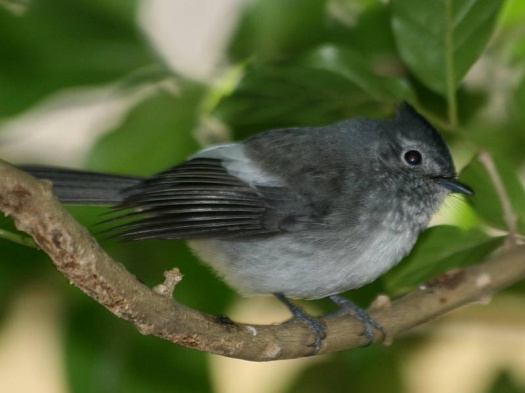 Length 15 cm, mass 10 g.
Adult male: The head, crest, throat and upper breast are glossy blue-black and the lower breast and belly are white. The back is grey, the wings dark brown with a white wingbar, and the tail black.
Adult female: The head is less glossy than the male's, and the crest shorter. The throat and breast are lightly mottled grey and white, grading to white on the belly. Wings and tail are similar to the male's.

The White-tailed Crested Flycatcher has no white wingbar. 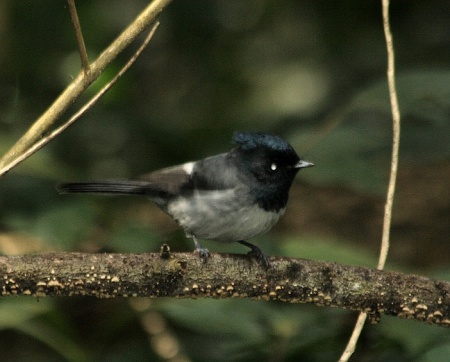 Eastern and southern Africa from southern Somalia to the forests of the southern coast of South Africa. Mostly resident; some altitudinal migration is likely.

Trochocercus cyanomelas has 5 subspecies:
T. c. cyanomelas is from the southern and south-eastern coast of South Africa, west of 29° 45' E
T. c. segregus from the South African coast between 29° 45' E and 31° 45' E, extending inland and northwards from KwaZulu-Natal to the highlands of western Swaziland, Mpumalanga and the Limpopo Province, paler than the nominate race
T. c. megalolophus from the lowlands of northern KwaZulu-Natal, Swaziland, eastern Mpumalanga and Limpopo Provinces, extreme eastern Zimbabwe, Mozambique, and southern Malawi.
T. c. vivax and T. c. bivittatus are found further north.

Found singly or in pairs.

Forage restlessly, often in multispecies feeding parties, for small invertebrates taken on the wing or gleaned from bark, leaves or twigs.

They are most easily located by their alarm call, a harsh zweet-zwa or zweet-zweet-zwa. They respond to pishing.

Search for photos of Blue-mantled Crested Flycatcher in the gallery