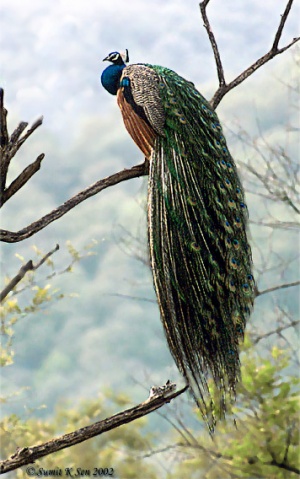 In Florida and Texas, many of the birds are hybrids with Green Peafowl, but no pure population of that species exists there.

Traditionally believed to be monotypic[1]; but birds of Sri Lanka have been suggested as a second subspecies.

They forage and nests on the ground but roost high in the trees.

Eggs are laid on alternate days; the clutch consisting of 4-8 light brown eggs. Incubation is by the female alone and lasts for about 28 days. The male takes no part in raising the young as he is Polygynous with up to six hens. 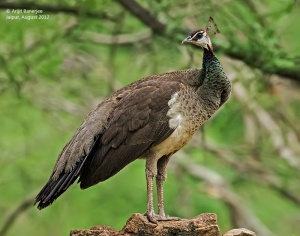 They are an omnivorous species, eating seeds and green plants, fruit and berries, insects, some reptiles, including small snakes.

Calls by many adults in early morning chorus during Monsoon. 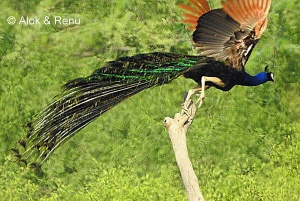 Search for photos of Indian Peafowl in the BirdForum Gallery

Search for videos of Indian Peafowl on BirdForum TV