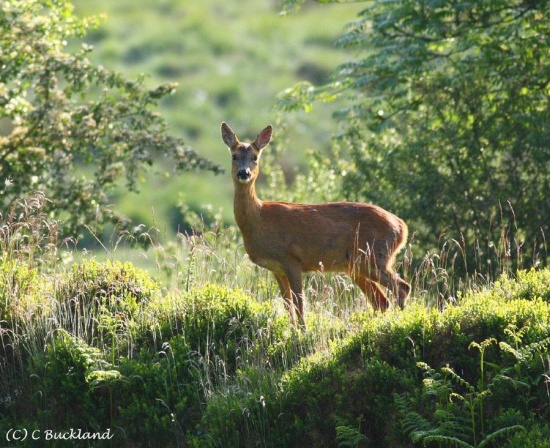 Like Dartmoor in Devon and Exmoor in Somerset, the Cornish Bodmin Moor is a raised plateau with extensive rough grassland and heather moors with bogs in many places. It has similar scattered granite outcrops known as tors and the river valleys are densely wooded.

These habitats hold birds typical of such areas in south-west England but in addition Bodmin has three reservoirs of great interest to birders.

The moorland birds of Bodmin resemble those of Dartmoor and Exmoor and include Common Buzzard, Northern Raven and Northern Wheatear, which can be widely seen, with small numbers of breeding Golden Plover, Common Snipe and Eurasian Curlew.

Streams and river valleys such as the Upper Fowey Valley are home to Common Kingfisher, Common Dipper and Grey Wagtail and the valley woods hold a good range of species. Eurasian Sparrowhawk breeds as well as all three British woodpeckers, although Lesser Spotted Woodpecker is rare, Marsh Tit and Willow Tits, Spotted Flycatcher, Lesser Redpoll and Siskin. Warblers include Willow Warbler, Common Chiffchaff and Blackcap and Grasshopper Warbler also breeds.

Late November and December see the arrival of large numbers of wintering thrushes to the woods and raptors occur on the moorland. These are often best seen on the moorland around Dozmary Pool, a naturally formed, rather deep pool set on high ground to the west of the valley. A small Hen Harrier roost is regular here as are a few Short-eared Owls and the occasional Peregrine Falcon, Merlin and Great Grey Shrike.

There are two major reservoirs on the south-eastern edge of Bodmin Moor, both lying in shallow moorland valleys.

Siblyback Reservoir is a 60ha water to the north of Liskeard and is well-known as a haunt of wntering waterfowl and passage waders with the occasional rarity recorded such as Ring-necked Duck.

As large freshwaters are scarce in south-west England any reservoir in this area is worthy of exploration and Siblyback regularly holds species such as Common Goldeneye, Goosander and even Smew, a very scarce bird in this part of England. Less scarce ducks include Mallard, Common Teal, Eurasian Wigeon, Common Pochard and Tufted Duck. Grebes are sometimes present, divers occasionally so and very severe weather further east will sometimes result in visits from small flocks of Greater White-fronted Goose or Bewick's Swan.

Lapwing and Golden Plover winter in large numbers on the moorland and the wetter bogs and reservoir edges hold wintering Common Snipe along with one or two Jack Snipe. Grey Heron and Great Cormorant are present all year.

In autumn lowered water levels lead to exposed mud, particularly on the northern shore, and small numbers of waders are regularly attracted. As well as the commoner Ringed Plover, Dunlin, Common Redshank and Green Sandpiper and Common Sandpipers there are scarcer species such as Curlew Sandpiper, Little Stint, Spotted Redshank and Wood Sandpiper are regularly seen.

Rarer still are species such as Red-necked Phalarope and Wilson's Phalaropes and Temminck's Stint, all of which have been recorded at Siblyback.

Little Gull and Black Tern are regular in very small numbers in autumn.

This reservoir is signposted from the town of Liskeard. Siblyback Reservoir on OpenStreetMap

Colliford Reservoir is larger but more recently constructed than Siblyback but is now attracting much the same range of birds. Whereas Siblyback is the haunt of water sports enthusiasts, Colliford is much less disturbed and consequently waterfowl numbers are often higher.

The reservoir has been home to a long-staying drake American Black Duck and has also attracted Ring-necked Duck.

The reservoir is best approached from opposite the Jamaica Inn on the A30 Launceston to Bodmin road although a minor road encircles the reservoir and there are various car-parks and lay-bys around the perimeter. The reservoir is an irregular shape and the eastern part extends northwards towards the A30. Much of this finger-like extension is a nature reserve known as Loveney and entry requires a permit obtainable from the warden at Siblyback. In addition there are a series of footpaths onto adjacent moorland. Colliford Reservoir on OpenStreetMap

The 50ha Crowdy Reservoir lies in the north of Bodmin Moor and attracts a similar range of wintering waterfowl to the more southerly waters although numbers are generally lower. Little Grebe and Great Crested Grebes breed in small numbers as do Reed Warbler and Sedge Warbler and there is an irregular Black-headed Gull colony.

Scarcer species such as godwits, Ruff, Curlew Sandpiper and Little Stint are annual and vagrants have included Nearctic species such as Wilson's Phalarope, Long-billed Dowitcher and Pectoral Sandpiper. Other North American waders recorded in the area with some frequency are Buff-breasted Sandpiper and American Golden Plover which are usually seen with the large Golden Plover and Northern Lapwing flocks found on the disused Davidstow Airfield nearby. Although they are not annually recorded this site is probably the most reliable in mainland Britain for both species and small numbers of Eurasian Dotterel are also sometimes seen.

Like other parts of Bodmin there are small numbers of raptors present in winter, Hen Harrier, Peregrine Falcon and Merlin being regular and Northern Goshawk has also been recorded. Both Northern Hobby and Montagu's Harrier are sometimes recorded on passage.

Crowdy Reservoir can be reached on minor roads from the A39 to the north-east of Camelford, there is a lay-by and a footpath leading to a hide at the northern end. A minor road from the A395 crosses the airfield and the best area tends to be that around the old control tower. Crowdy Reservoir on OpenStreetMap

Search for photos of Bodmin Moor in the gallery