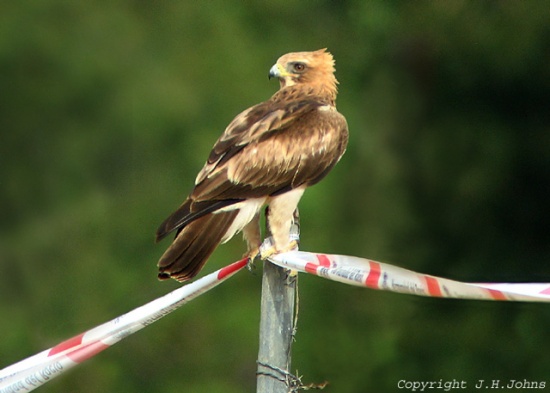 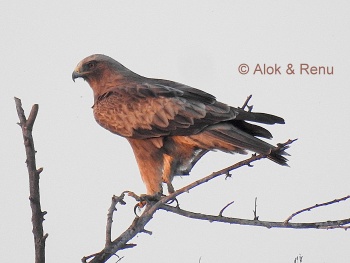 Booted Eagles occur in 2 distinct colour morphs, pale and dark. There is also a rare rufous form which is essentially a pale extreme of the dark morph. Pale phase birds predominate, particularly so in the west of the bird's range where the ratio of pale to dark is approaching 4:1.

The incidence of dark phase birds increases towards the east of the bird's range approaching a 3:2 ratio of pale to dark in Turkey.

The light phase bird is reasonably easy to identify, with pale wing coverts and most flight feathers black; inner primaries are barred lighter.

The dark phase is a little more tricky to ID but it is separated from similar sized raptors by its pale inner primaries which show faint barring, its 6 "fingered" hand and at the right angle, the white "landing lights" on the front wings proximally (which are not visible on all birds much less from all angles).

Upperside is similar in the two phases, notice the paler median coverts on the upperwing and a narrow pale area where tail meets uppertail coverts.

Young birds are similar to adults, probably not separable in dark phase but in pale phase look for slightly more rufous in head and undersides and slightly more striped impression. 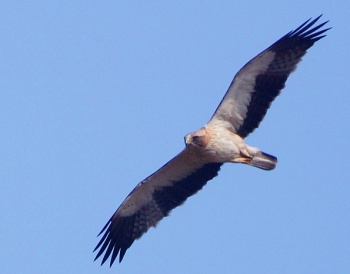 About the same size as Common Buzzard, but depending on angle the plumage of the dark bird is more likely to mislead you to think about Black Kite or younger Bonelli's Eagle; pale phase birds share color pattern with Egyptian Vulture but that bird has a very different shape.

Europe, Asia, and Africa.
In Europe breeds in southern Portugal and much of Spain including Mallorca, and in scattered parts of central and southern France. Patchy range further east in Europe including southern Slovakia and northern Hungary, southern Romania and Bulgaria and parts of former Yugoslavia and Greece. Also breeds in extreme east Poland and south Belarus, and the Ukraine east into southern Russia and over much of Turkey and the Caucasus.

Breeding range extends eastwards to Central Asia breeding in western Sinkiang and also in north-east China. In Africa breeds in the north-west from central Morocco to north-east Tunisia and in the far south in Cape Province, South Africa.

Booted Eagle is mostly a migrant that winters in sub-Saharan Africa, India and in South-East Asia south to the Malay Peninsula. The main routes used by migrants to Africa are Gibraltar, the Bosphorus and through the Caucasus. The highest numbers travel via Gibraltar in late-August to early-October, peaking in mid-September. The return movement takes place early March-May, peaking in early April. Small numbers winter in Europe mainly in southern parts of France and Spain. 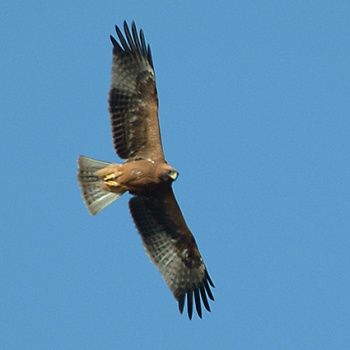 Vagrant north to Iceland, Sweden, Denmark, Switzerland, and Germany (first breeding in 1995), also Luxembourg and Belgium but only a single record for the British Isles when one individual spent March-August 1999 in Ireland and October 1999 to February 2000 at various localities in south-west England. The same bird or another was reported from Kent in April 2000. However, this individual has not been accepted as a genuine vagrant and has been placed in Category D of the British List, ie there is doubt concerning its origins. In 1998 a vagrant was recorded on Madeira for the first time. Most vagrants are immatures and recorded in summer and autumn. In May 2002 an immature was reported on Alderney in the Channel Islands. In the east recorded as a vagrant to Bali. 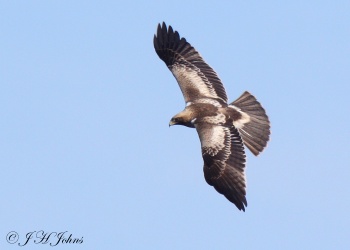 Upperside of dark phase; notice the double pale areas on the back (here almost connected to form a U-shape
Photo © by john-henry
Algarve, Portugal, November 2009

There is wide disagreement about how many subspecies exist, from some saying monotypic[1], others two to four subspecies recognized[2].

If two races are recognised they would be: harterti in south-west and Central Asia and nominate (pennatus) in remainder of range. If four, the additional subspecies would be milvoides and minisculus.

They can perform amazing stoops.

Their main diet consists of birds up to the size of partridge. But they will also take insects, rabbits and lizards.

Nest is placed in a tree, built by both male and female. Female does the bulk of incubating, with most often two eggs leading to only one fully grown nestling. The nestling becomes independent shortly after leaving the nest (about two weeks). 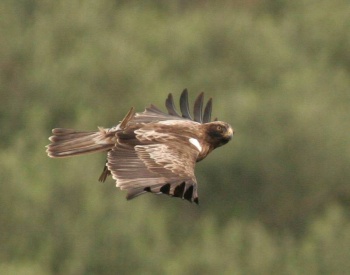 Upperside of dark phase; notice the landing lights at the front of the wing where it meets the body
Photo © by ColD
Kaliviani, Crete, December 2006

Search for photos of Booted Eagle in the gallery

Search for videos of Booted Eagle on BirdForum TV