View from the 12 mile tour loop, December 2004
Photo by HelenB

Bosque del Apache NWR is 57,331 acres (89.58 mi²) in size and was established in 1939. It is located on the Rio Grande River, 20 miles south of Socorro in New Mexico. It is famous for the huge numbers of wintering cranes, ducks, geese and eagles. These are found in the floodplain part of the refuge, where the driveable loop tours are also located. The floodplain area is surrounded by arid foothills and mesas which are accessible for hiking. About 350 species of birds have been seen here. 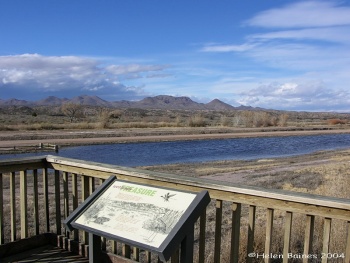 Thousands of Sandhill Cranes and Snow Geese in the winter. Bald Eagles are easy to see at the crane and waterfowl roosts. 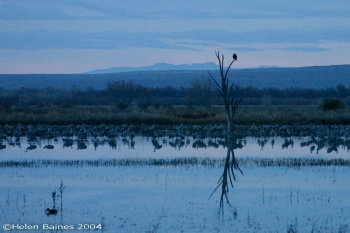 A folder called "watchable wildlife" is available in the refuge as well as on the web (see below in External Links). This details both birds, mammals, reptiles, amphibians, and fish found in the area. Among the most commonly seen mammals are Mule Deer, Collared Peccary and Rock Squirrel, and e.g., Striped and Spotted Skunks, Coyote, etc, are relatively common but more rarely seen. Even Mountain Lion can occasionally be seen in the publicly available areas of the refuge. 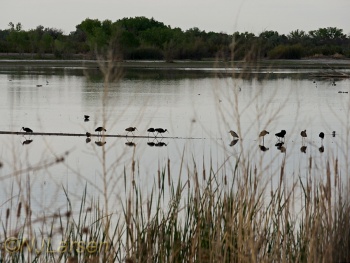 White-faced Ibis and Black-crowned Night Heron on one of the ponds, April 2013
Photo by njlarsen

Bosque del Apache NWR was established in 1939. The central area contains managed flood plain with seasonally wet ponds, but surrounding that are areas managed with farming which produces winter food for e.g., cranes.

Looking west towards the Chupadera Mountains with Snow Geese in the fields, December 2004
Click photo to see a larger image
Photo by HelenB