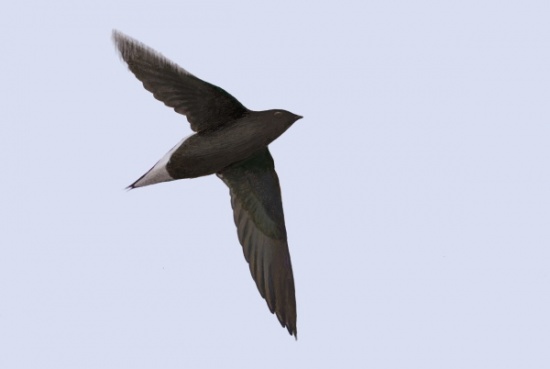 Photo by Dave B

Found in South-east Asia. In India in the Western Ghats and on Sri Lanka. Also from Bangladesh (where rare) and Assam to Myanmar, Thailand, Vietnam, Laos, Cambodia, Malaysia, Sumatra, Java, Borneo and Palawan (Philippines).
Quite common where good habitat is available. Not globally threatened.

Forms a superspecies with Purple Needletail and was also considered to be conspecific with it. Sometimes placed in genus Chaetura.

Differences between birds of India and the Andamans suggest a third subspecies. More study needed.

Usually above primary forest. Also above secondary forest when rivers and lakes are present. Over lowlands and hills up to 1800m.

Gregarious, usually seen in big flocks, sometimes together with other Needletails. Roosting at night in groups in small tree holes.

In India a resident species with some local movements. Birds from northern Indochina may be short-distance migrants to the Malay Peninsula and maybe further to Borneo. The southern birds (subspecies giganteus) are resident.

Feeds on various insects which are taken in flight over forests, rivers or lakes.

Nesting recorded from February to April in India. Solitary nester in a tree hollow, no nest built. Lays 3 to 4 eggs.

Search for photos of Brown-backed Needletail in the gallery