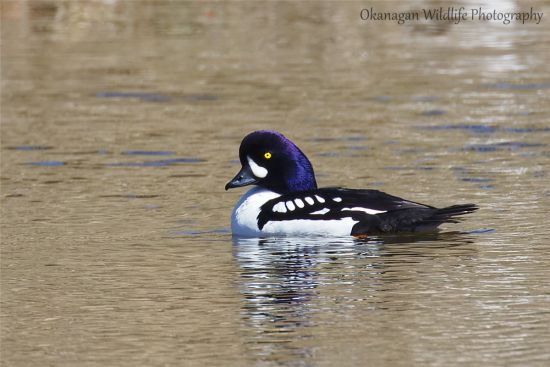 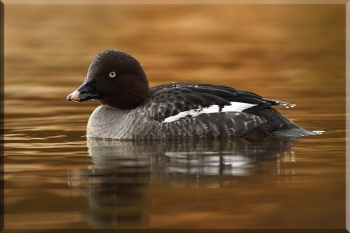 Very similar to Barrow's Goldeneye. Note white scalloping on back rather than solid black (Barrow's). Circular facial patch on Common, oblong patch on Barrow's. Male Barrow's Goldeneye has purple gloss on head, but this is hard to distinguish in the field. Hybrids are possible. 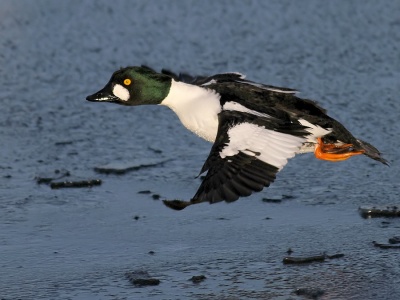 Widespread throughout the Northern Hemisphere.
Europe
Breeds over most of Scandinavia and northern Russia with small isolated populations in Scotland and Northern Europe from north Germany east to the Baltic States. Breeds sporadically further south as far as Turkey, recently recorded in France, Austria and Hungary. Also breeds across northern Asia from the Urals to northern China, Sakhalin and Kamchatka.
North America
Breeds in central and southern Alaska and over much of Canada and the north-central USA.

Europe
Widespread from south-west Iceland, the British Isles and northern France east to coastal Norway and the southern Baltic, on the lakes of Central Europe and in the north-east Mediterranean and the Black and Caspian Seas and across Central Asia.
North America
Winters from southern Canada and throughout the USA and northern Mexico. 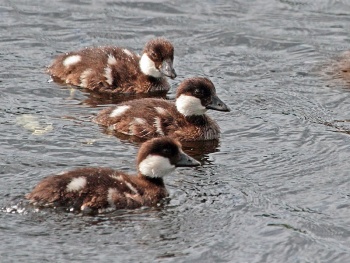 Vagrants recorded south to the Azores and Iberia, the Mediterranean islands and North Africa, Israel and Jordan, northern India, Hong Kong and the West Indies.

Medium sized sea duck of the genus Bucephala, the goldeneyes. Their closest relative is the similar Barrow's Goldeneye. 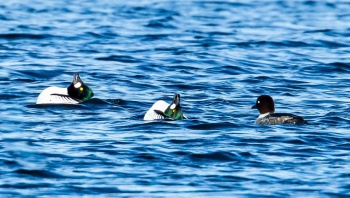 Breeds in woodland close to lakes and rivers, in winter and on passage on large freshwaters, estuaries and sheltered bays. Frequently seen on reservoirs and gravel-pits.

They may fall prey to various hawks, owls and eagles, while females and their broods have been preyed upon by bears (Ursus spp.), various weasels (Mustela spp.), mink (Mustela vison), raccoons (Procyon lotor) and even northern flickers (Colaptes auratus) and red squirrels (Tamiasciurus husonicus).

The male's display consists of throwing his head back onto his back with the bill pointing skywards. They nest in tree holes or nest boxes.

Search for photos of Common Goldeneye in the gallery

Search for videos of Common Goldeneye on BirdForum TV