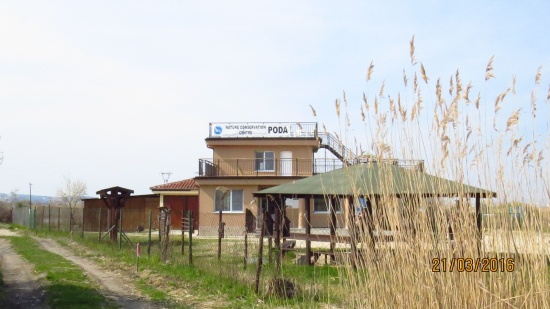 This site, or rather, group of sites, is situated on the central Black Sea coast of Bulgaria and is one of the best areas for waterfowl in the country despite having suffered from serious habitat loss in recent decades.

The main habitat consists of four lakes, Burgas, with extensive reedbeds, Mandra, now a reservoir, Poda, a brackish lagoon, and Atanasovo which, despite much industrialisation and now being little more than a series of salt pans, is now a Ramsar Site.

The area attracts a range of birds at all seasons with some rare breeding species including Little Bittern and several heron species, Ferruginous Duck and Gull-billed Tern with Pygmy Cormorant and Glossy Ibis formerly breeding at Lake Mandra. 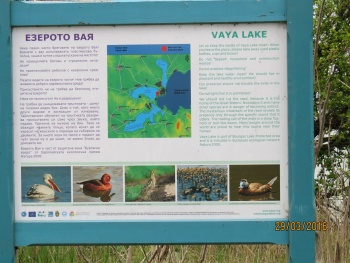 Information board for Lake Vaya (Lake Burgas)
Photo by Scridifer

All the lakes lie close to the town of Burgas which has an airport. The E87 coast road follows the eastern edge of Lake Burgas, also known as Vaya, and there is access to the shore at several points.

One of the better areas of this brackish lake is the western shore between the villages of Gorno Ezerovo and Dolno Ezerovo. There are also some abandoned fishponds in this area and a working fishfarm close to Dolno Ezevero where birders are generally welcomed. Great Cormorant breeds at Lake Burgas and although Pygmy Cormorant may be seen it does not nest. Similarly Great White Pelican is often present but does not breed here. Both bitterns occur as well as Squacco Heron, Black-crowned Night Heron and Purple Heron, Great White Egret, Little Egret and Cattle Egret, Eurasian Spoonbill and Glossy Ibis.

Atanasovo is a shallow coastal lagoon heavily utilised for salt production that lies about 3km to the north-east of the town of Burgas. Around the lake there are freshwater marshes and a canal, wet meadows and drier farmland as well as the Black Sea coast. Despite its very industrial appearance Lake Atanasovo often has the best birds in the Burgas area and access is easy as the E87 passes through the middle of the salt pans.

More than 250 species have been recorded at Lake Atanasovo with breeders including Little Bittern and Purple Heron, Black-winged Stilt and Pied Avocet, Collared Pratincole and Mediterranean Gull and Gull-billed Tern, Sandwich Tern and Little Tern.

Often present in summer but as non-breeders are Pygmy Cormorant, Glossy Ibis and Eurasian Spoonbill, Slender-billed Gull and Caspian Tern.

The range of birds seen here during passage periods is astounding. Both pelicans and both storks, herons and waterfowl including swans, raptors, including most of the European migratory species, virtually all the wader species including Red-necked Phalarope and even Slender-billed Curlew at times and various gulls and terns. European Bee-eater, European Roller and Eurasian Hoopoe are regular migrants and passerines can include Thrush Nightingale, Isabelline Wheatear and sometimes Aquatic Warbler. The variety and numbers of breeding birds in particular has declined over recent decades but there is still much of interest for the visiting birder. 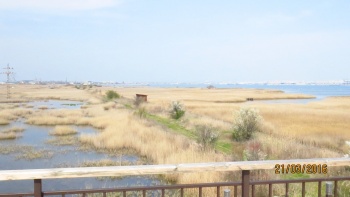 The Poda Lagoon area has an excellent reputation for passage waders and consists of a the coastal lagoon itself, a rivermouth and various small waterbodies of varying salinity. These are surrounded by grassland, scrub and woodlands on the southern edge of Burgas reached on the E87 heading for Sozopol.

The reserve here has an information centre. Pygmy Cormorant and Glossy Ibis have bred at Poda and Little Bittern, Little Egret and Eurasian Spoonbill are regular. Also breeding are Black-winged Stilt, Pied Avocet and Collared Pratincole, and Common Tern and Little Tern.

Passage periods bring a wide range of birds to the area including divers and grebes, pelicans, storks and herons, waterfowl and raptors. Migrant waders include Little Stint, Great Snipe, Broad-billed Sandpiper and Marsh Sandpiper and many commoner species, Marsh terns are common on passage, skuas occur and gulls include Slender-billed Gull and Mediterranean Gull. 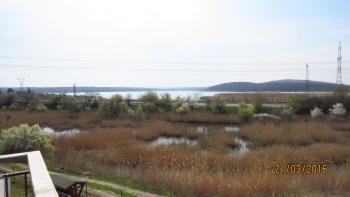 Mandra is the southernmost of the four lakes and lies south of Burgas to the west of the E87.

Now a reservoir, Mandra is a large freshwater lake with dense marginal vegetation in parts and surrounded by farmland except to the south where woodland reaches the shore. It can be viewed from many points reached from the E87, the road to Sredetz or the road to Tvarditza. The reserve is some marshland about 2km west of Tvarditza. The breeding and passage birds are much the same as the other lakes in the area.

Rarities recorded in this area include Slender-billed Curlew (though none for some years now), Pallas's Gull, Saker Falcon, and recently, the first Yellow-billed Stork for Bulgaria. Rose-coloured Starling bred in large numbers in the area in 2000 but this is an irregular species.

All four lakes are within easy reach of the town of Burgas where a range of accommodation can be found.

Search for photos of Burgas area in the gallery