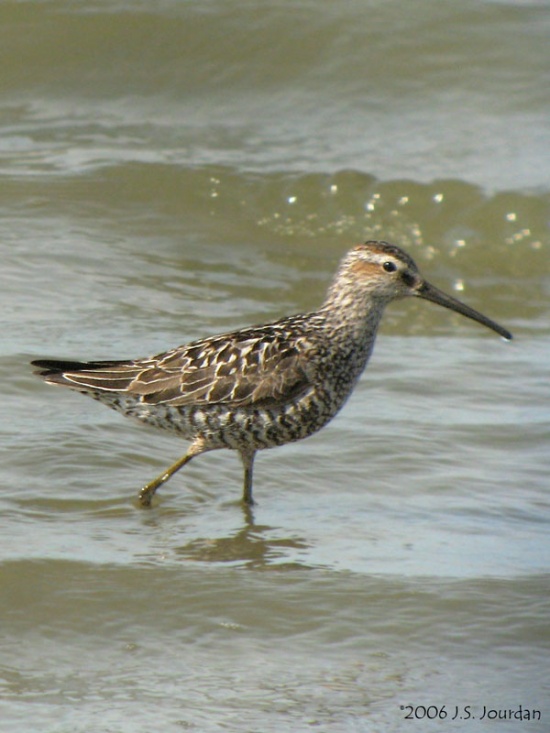 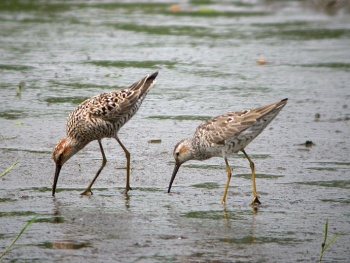 Two birds molting into breeding plumage on spring passage. The left bird is at a more advanced stage of molt. Note partially-webbed toes on right foot of the right bird.
Photo © by Chaiyan
Polk City Wildlife Area, central Iowa, May 2004

Breeds on tundra close to the Arctic Sea coasts of northern Alaska, northern Yukon, Northwest Territories, and Nunavut, and the Hudson Bay shore of Manitoba. On migration on open freshwater pools throughout North and northern South America, though scarce west of the Great Plains. Winters in South America from Peru to northern Argentina; a few also winter in Florida and southern California.

Vagrant to Europe, including the British Isles, mostly adults in late summer.

The Stilt Sandpiper was formerly placed in the genus Micropalama by most authorities, but this treatment was found to leave the genus Calidris paraphyletic.[2]

Often wades in deep water, often mixing with other Calidris species or with Long-billed Dowitchers and Lesser Yellowlegs. 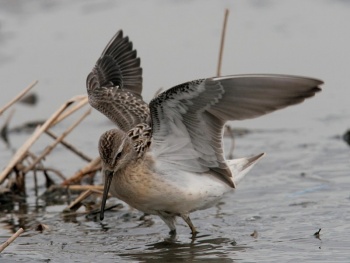 The diet includes insects and other invertebrates.

Search for photos of Stilt Sandpiper in the BirdForum Gallery

Search for videos of Stilt Sandpiper on BirdForum TV