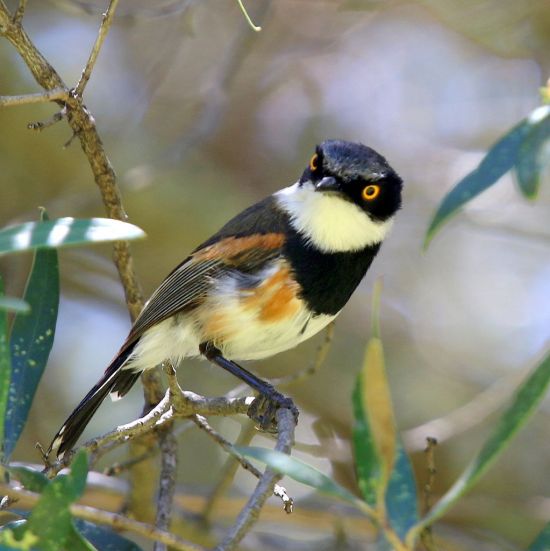 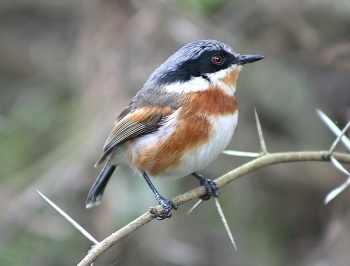 Cape Batises have large heads relative to their small bodies. They weigh 5.1 ounces (13 grams) and are 6 inches (15 centimeters) long. They have short tails, round wings, and orange eyes.

Adult male: Has a dark blue-gray back and tail, black head with a grey crown, white throat and belly, reddish brown flanks, and a black breast band.

Adult female: Similar to the male, but with reddish brown throat patch and breast band. 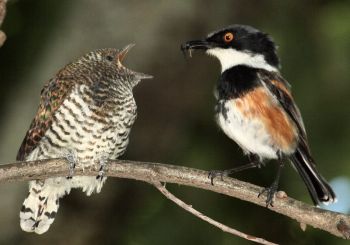 Batis capensis has six subspecies, variation being mainly in size (northern races larger) and shades of grey and rufous plumage:1,2

Sibley & Monroe6 recognised the Malawi Batis (B. c. dimorpha and B. c. sola) as a separate species. This splits from the Cape Batis has, however, not been recognised by Clements1 or Howard & Moore3. Recent genetic evidence from a study of the forest Batis species2,5 indictates that birds from Malawi are closely related to South African birds, but the two populations are sufficiently different to recognise them as separate species. However, birds from Zimbabwe and Mozambique were not included in this study.

The Cape Batis makes his home in forests, scrub, and planted gardens in southern Africa. Their range is from sea level to 7,050 feet (2,150 meters).

Like other flycatchers, Cape Batises eat insects and actively seek them throughout the forest canopy by flushing, frightening, them from their places of cover, hiding. The birds then capture their prey as it flies.

This species mates from September to December, building a small cup-shaped nest of dry grasses, held together with spider webs. The nest is built low in thick brush in the fork of a branch and holds one to three eggs. The female incubates, sits on and warms, the eggs for seventeen to twenty-one days. Mating pairs stay together for life. Parasitised by Klaas's Cuckoo.

Search for photos of Cape Batis in the gallery