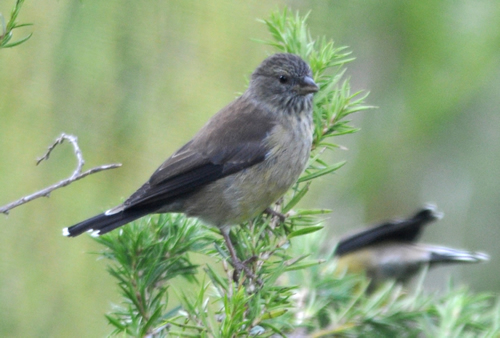 This is a monotypic species[1].
Formerly placed in genus in Pseudochloroptila by Clements or in in Serinus.

Fynbos of mountains and valleys; also edges of forest and pine plantations, patches of alien Acacia, and gardens.

In pairs, family groups or flocks.

Forages on the ground in bare patches, mainly for seeds, but also eats buds, flowers, nectar and insects.

The nest is a shallow cup of fine grass and fine rootlets and lined with fine grass (sometimes plant down, wool, or hair), built by the female. Three to four eggs are laid August to December, and incubated for about 13 days by the female (fed by the male on the nest).

There is one record of brood parasitism by Red-chested Cuckoo.

Search for photos of Cape Siskin in the gallery