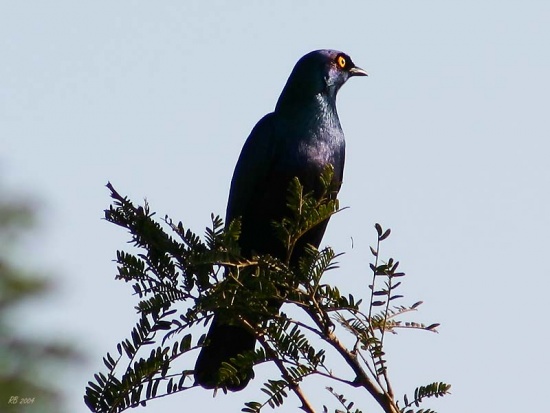 25 cm (6 in). A rather large glossy starling with a short tail and an uniform appearance.

Found from around the mouth of the River Congo south through Angola to southwest Zambia, Zimbabwe, Namibia, Botswana and South Africa (except Cape region and dry western interior). Also in the lowlands of Lesotho, Swaziland and into southern Mozambique.
Widespread and common in most of its range.

A monogamous species. Breeding season September to March in South Africa and probably February to March in Angola. A co-operative breeder, offspring of breeding pair remain up to 3 years as helpers. The nest is placed in a tree cavity (including old woodpecker or barbet holes), rarely in riverbanks. Lays 3 eggs.

An omnivorous species. Feeds mainly on fruit and insects but takes also carrion and bread and bone meal at birdtables.
Usually forages in flocks of up to 20 birds, sometimes also in mixed-species flocks.

Search for photos of Cape Starling in the BirdForum Gallery