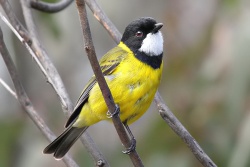 Whistlers and allies are found in from southeast Asia east to Australia and New Zealand. Most species occur in New Guinea.
Most species have a large rounded head. Their wings are short and broad and the rictal bristles are generally short. Many species have dull or drab colours in plumage, often with little patterning.
Many species of this family have a loud, whistling voice.

Pachycephalidae is a Family in the Order Passeriformes.


The Mohuas from New Zealand have been moved to this family recently but are now placed in their own family Mohouidae.
The species from the newly formed family Oreoicidae were also included here.
The Olive-flanked Whistler from Sulawesi has been included in this familiy in the past but is now moved to Hylocitreidae. The genus Pitohui has been moved to Oriolidae. Furthermore the genera Falcunculus is now placed in its own family Falcunculidae, Eulacestoma in Eulacestomatidae and Rhagologus in Rhagologidae.

This category has the following 7 subcategories, out of 7 total.