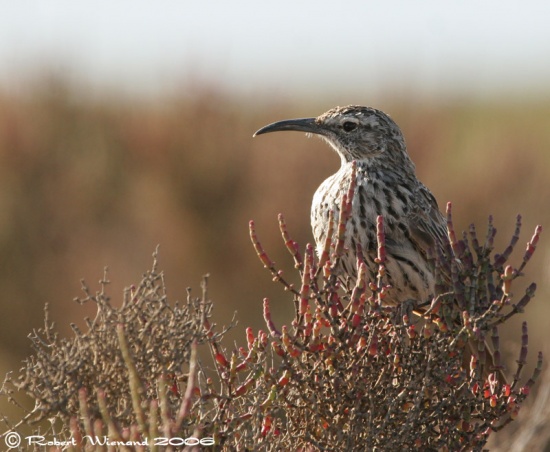 Length 20-24 cm, mass 50-60 g
A large lark with a distinctive long, decurved bill.
Upper parts are grey-brown with dark streaks and the underparts (including belly and flanks) are white with dark brown streaks.

Usually in pairs. Walks on the ground while foraging for insects and seeds; turns over stones and digs in the soil.

Monogamous and territorial. The nest is a cup of grass, sometimes with a partial dome; it is built on the ground at the base of a bush, grass tuft or stone. Usually three eggs are laid.

The male sings from a perch, the ground, and while in aerial display. The call is a loud descending whistle peeeuuu lasting about a second (repeated every 8-15 seconds while perched).

Search for photos of Cape Long-billed Lark in the gallery