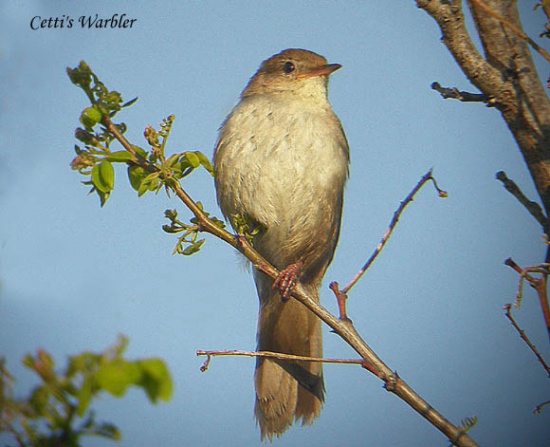 Found in south-western and southern Europe, North Africa and east over Turkey, Iran, Afghanistan and Pakistan to western Xinjiang (China).

Mainly resident, but migratory in East. 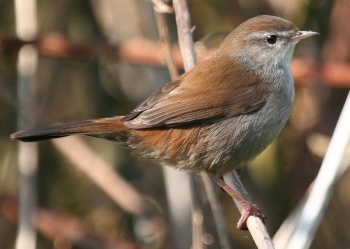 A fourth subspecies, sericea, is not recognised by all authorities[2]

Breeds in dense, rather tall and often well-delimited vegetation, preferably near but not in water, e.g. in drier tall reeds with scattered bushes, stands of papyrus, willow, bamboo, various thick bushes etc.; sometimes breeds near human habitation, in thickly wooded parkland, beside reservoirs and canals etc.

Generally keeps concealed in vegetation, often hops on ground or low down in shrubbery.

The diet consists mostly of insects including damselflies, earwigs, moth larvae and aphids.

Sometimes Monogomous but more usually polygamous. Nests low down in dense vegetation. The 3-6 eggs are laid in a nest which is built in a bush near water.

Search for photos of Cetti's Warbler in the gallery

Search for videos of Cetti's Warbler on BirdForum TV