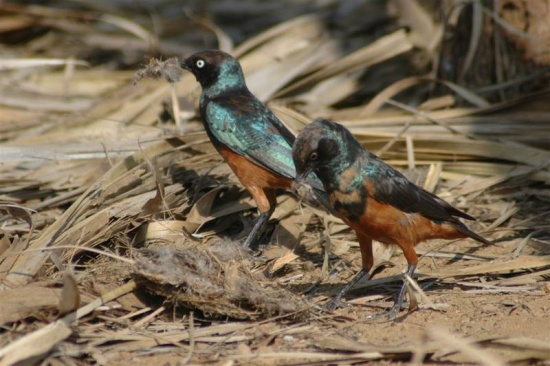 20cm. A small, short-tailed and rather dull starling.

Sexes similar. Juveniles are duller than adults, have a brown eye, a yellowish bill and brown legs.

Found in the Sahel region of sub-saharan Africa from Mauritania and Senegal east to Eritrea and northwest Ethiopia.
Locally abundant, uncommon in other parts of range.

This is a monotypic species.
The described subspecies rufiventris is generally considered invalid. Has been placed in genus Spreo in the past.
Has been considered to from a superspecies with Hildebrandt's Starling and Shelley's Starling.

Savanna. Wooded and bushed habitats, including gardens and villages.

Feeds mainly on insects. Takes also fruit, dead mice, small chameleons and kitchen scraps.
Forages in small flocks on the ground. Associates with other starlings and White-billed Buffalo-Weaver.
Breeding season differs through range, breeding recorded in all months. A co-operative breeder, breeding groups consist of two or more pairs with 6 - 26 helpers. The nest is a ball of grass, placed 2-3 m above the ground in a thorny tree. Uses also nests of White-billed Buffalo-Weaver and breeds in association with Greater Blue-eared Glossy-Starling. Lays 3 - 5 eggs, the nest is sometimes parasitised by Levaillant's Cuckoo.
Presumably a resident species with some local movements.

Search for photos of Chestnut-bellied Starling in the gallery