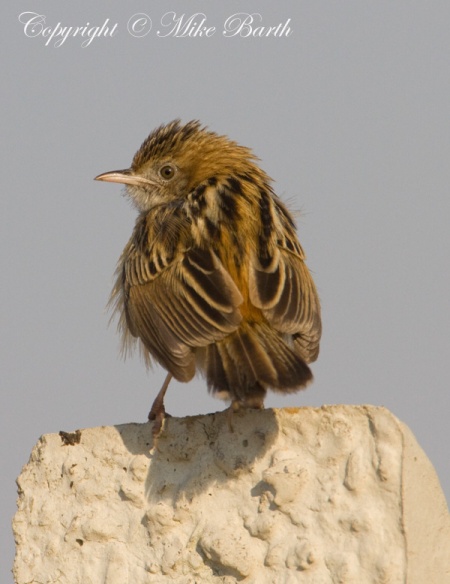 Length 9-10 cm (3½-4 in); mass 8-13 g
Breeding Adult: The upper parts are brown, streaked blackish. The tail is very short, the upper side being black with a white tip. The under parts are mostly whitish, with brown streaks on the sides of the breast and buffy-white flanks. The eyes are pale brown, and the legs and feet are pinkish brown.
Non-breeding Adult: Similar to the breeding adult, but the upper parts are more rusty, the crown is more heavily streaked, and the tail longer.

Difficult to tell from Wing-snapping Cisticola unless calling.

Forages on the ground and in grass tufts for arthropods.

The nest is a ball of grass with a side entrance. It is built close to the ground on a grass tuft. Two to four eggs are laid (August to March in South Africa).

Search for photos of Cloud Cisticola in the BirdForum Gallery