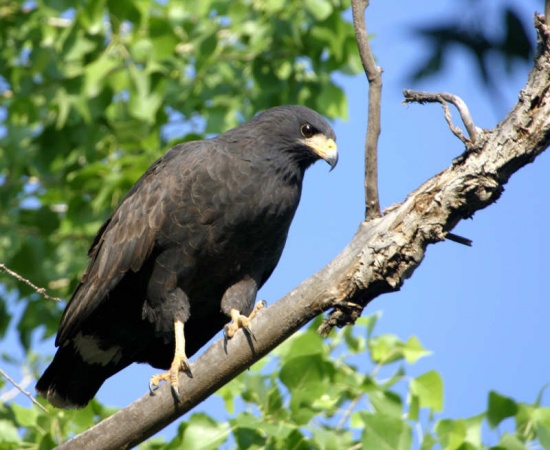 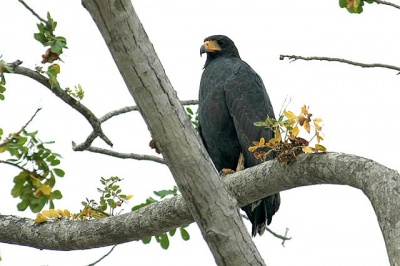 Length 50-58cm (20-23"), wingspan 122-127cm (48-50")
As the name implies, this is a very dark hawk; dark brown to almost black, with a yellow bill tipped in black, and some white spotting on the base of the primary flight feathers, and at the tip of the tail. In its limited US range, it is most easily identified by chunky shape and broad white band crossing middle of tail. Compared with Great Black Hawk, skin of cere generally brighter yellow and extends beneath the eye. Lacks fine barring on the thighs (tibials) which may be present in Great Black Hawk (esp. Central America). Shorter tail means wing tips almost meet its tip but longer primary projection than Great Black Hawk. Dark rump 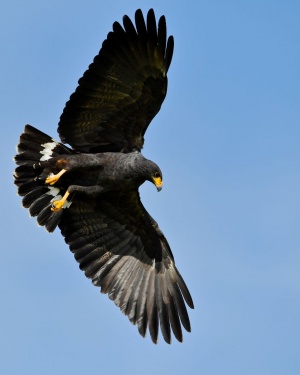 Overall common and widespread. In its limited US range it is rare and local, with an estimated 250 breeding pairs remaining.

Recent evidence has led the population on Cuba to be considered a separate species, the Cuban Black Hawk (Buteogallus gundlachii). However, the Mangrove Black Hawk (B. subtilis including subspecies rhizophorae and bangsi) is now included in Common Black Hawk as three subspecies. 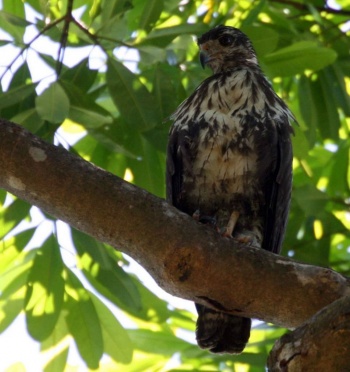 Wide range of wooded habitats, especially in coastal areas. In the northernmost parts of its range, nests most commonly in cottonwood trees in riparian areas.

Gentle and lethargic except while nesting, when it often drops out of the skies from great height.

They build a large stick nest in a tree, and usually lays one dark-blotched whitish egg. Will abandon nest if disturbed too much.

They have a very varied diet but fish and reptiles are very important to them. Dietary items include crabs, small vertebrates and eggs.

Search for photos of Common Black Hawk in the gallery

Search for videos of Common Black Hawk on BirdForum TV